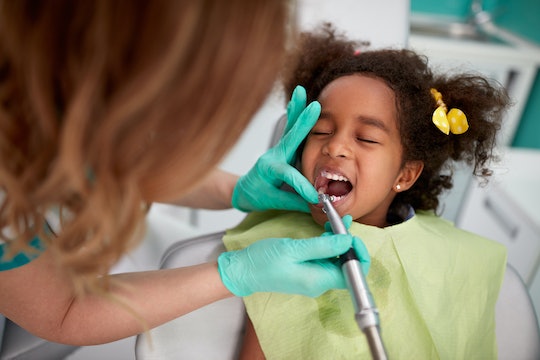 These Kids Are More At Risk For Cavities, & It Highlights A Frustrating Problem

Access to quality dental care is still an issue in the United States. Even though a recent study found that the percentage of young people with dental cavities in the U.S. has dropped from 50 percent in 2012 to a little over 43 percent in 2016, some kids are still dealing with a high rate of cavities — and a disturbing number of those cavities are going untreated. A study from the U.S. Centers for Disease Control and Prevention found that minority community kids are more at risk for cavities, and it really highlights a huge problem with dental care and health care access in this country.

A 7 percent drop in just four years is definitely positive news, but it's clear that too many kids are being left out when it comes to accessing adequate dental care. The CDC study of dental decay evaluated data from young people living in the U.S. between the ages of 2 and 19, and determined the that kids in minority communities have the highest number of cavities, CNN reported.

The highest rate of total and untreated cavities was found in Hispanic and non-Hispanic black youth. Hispanic youth had the most cavities at 52 percent, but black youth were not far behind, at 44.3 percent. Asian kids came in at 42.6 percent, and white youth came in last at 39 percent, according to CNN.

In addition, 13 percent of kids in the study had cavities that had gone untreated, WebMD reported. In that instance, black children were at greatest risk. Dr. Roseann Mulligan, associate dean and professor at the University of Southern California's Herman Ostrow School of Dentistry, told CNN that socioeconomic status, education level, and access to health care are among the reasons why Hispanic and black children might have the highest degree of both total and untreated cavities.

Income disparity definitely seems to be a huge part of the problem here. The CDC study reported:

It's true that cavities and tooth decay are some of the world's most common health problems, and that they're especially common among children, teenagers, and older adults, the Mayo Clinic reported.

But simply having a cavity isn't the only problem or the end of the discussion here — if left untreated, cavities can cause pain and infection, and in extremely rare cases, tooth decay can be deadly. Specifically, Dr. Eleanor Fleming, the author of the study, cited the case of a 12-year-old boy named Deamonte Driver, who died back in 2007 as a result of a severe brain infection caused by dental decay.

Fleming told CNN cavities can cause kids to miss school, or to not be able to chew properly. It can also prevent them from being able to speak and communicate properly because of the pain. That sort of pain and distraction can understandably lead children to lose focus, which is important when it comes to learning.

Parents magazine once reported that at least four million preschoolers suffer from tooth decay, and recommended that parents teach their kids to "diligently brush and floss," and to have them see a dentist by their first birthday.

But the truth is, not every kid has access to dental care. As this study noted, socioeconomic barriers are just one factor that prevents a lot of children from accessing adequate care. Not every family has dental coverage, after all. Plus, even if families are eligible for insurance, they might not know what dentist or dental clinic their insurance will let them go to. Mulligan told CNN:

If we don't have a multipronged effort, then I don't think we are ever going to crack this problem. We have to think more broadly.

Actually being able to get to a clinic is part of the issue too. Someone in a rural area might have more trouble accessing dental care, and might not make it a priority for themselves or their kids as a result. Dr. Rosie Roldan, the director of pediatric dentistry at Nicklaus Children's Hospital in Miami, noted distance to a provider as being a possible issue, among other barriers, like the other costs involved in having healthy teeth. Roldan told WebMD:

Plus, healthy food is expensive. Even toothpaste can be expensive for some families.

The bottom line is, dental care access is still a huge problem for a lot of families. And kids who are members of minority groups are especially at risk, through absolutely no fault of their own. Being able to eat, communicate, and focus on schoolwork are things kids shouldn't have to worry about sacrificing because of cavities and inadequate dental care, and we should all be more committed to making dental care access a reality for all families and children.