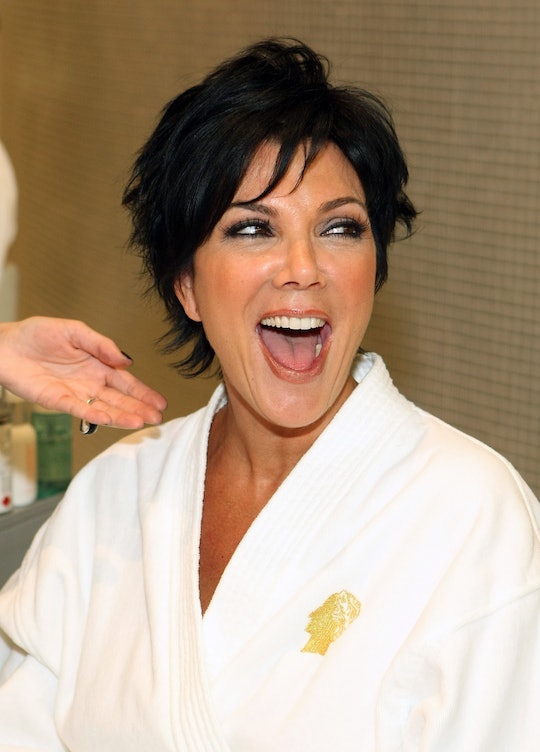 Unless you've been under a rock or without WiFi for the past few days, certainly you haven't missed the fact that Khloé Kardashian gave birth to a daughter early Thursday. Meanwhile, the father of her child, Tristan Thompson, has been outed for allegedly cheating on her. Though there's a lot to unpack, and as of yet, none of the Kardashians or Jenners have commented on the news, fans are responding to the Tristan Thompson cheating rumors with Kris Jenner memes, and if it weren't so dark, it would almost be funny.

As everyone knows, mother of the decade Kris Jenner is a force to be reckoned with, especially when it comes to turning her children's lives into billion dollar commodities. Aside from her astute business acumen (which many fans have already pointed out will undoubtedly not be working in Tristan's favor here) she's also a fiercely protective person, especially when it comes to her family. As any mom could empathize, she's probably, uh, not too happy with Tristan right now.

As a means to cope with this news (and let's be real, even people who don't keep up with the little known family from Calabasas is feeling for what Khloé is going through right now) some have taken to social media to share their hunger for revenge through none other than Kris Jenner memes and tweets. While some people are speculating about how angry the momager must be, others are convinced that she's already plotting their court date to get full custody of the baby. Though it's impossible to say what's actually going on in her mind right now, it is possible to be entertained by the plethora of Kris kontent that fans are delivering.

Truly, very little has fascinated the world as much as the Kardashian-Jenner's lives, and particularly when there's controversy of this degree, it's hard to look away.

2. Kris Has Somehow Already Made 10 Percent From This Ordeal

Once a momager, always a momager.

3. Kris Jenner Is Probably Planning To Secure Tristan's Assets For The Baby

There's no reparation for the emotional damage of having been (allegedly) cheated on so late in pregnancy. There is, however, legal and financial reparations that can be paid, and fans seem confident that Kris will be making sure that happens.

4. Kris & Khloé Are Probably Planning To Sue For Custody

Khloé hasn't yet mentioned whether or not she and Tristan are still together (in fact, she hasn't commented at all so far, probably because she's a little busy right now). However, if things are over between them, some fans are confident she will be at least attempting to secure full custody, with Kris Jenner right behind her.

Literally any mom can understand the feeling of seeing their child get hurt, and feeling compelled to do something about it. But to be seeing your child hurt in such an extraordinarily painful and highly public way is next level, which is why some people imagine Kris' response will be, too.

6. The Moment Kris Found Out Was Probably Terrifying

Any mom could relate.

7. Tristin Is About To Incur The Wrath Of Kris

Though some may assume that Khloé is the one to fear, others realize the truth, which is that Kris is the real OG. Alongside a meme of her pursing her lips and seeming pretty ticked off, a fan wrote:

"The worst part about Trist Thompson cheating on Khloe Kardashian is not Khloe. It's Kris Jenner. No one works harder... She is going to destroy him."

8. This Could Make For More Reality TV Fodder

As the Kardashian-Jenners are infamous for sharing just about every part of their lives with the world, it's plausible that viewers could be watching what's going down on an upcoming episode of the show. However, considering that they hid at least one pregnancy until term in recent history, it's very possible that the family could keep this to themselves. Only time will tell.

9. Some Think Kris Will Get Rid Of Tristan As Fast As She Did Tyga

Though others have been quick to point out an important detail: Tyga didn't cheat on Kylie, and Kylie wasn't pregnant with his child. This means that there's probably going to be more than an exiling.

More than anything, people seem pretty amped to watch how Kris enacts her legal revenge upon Tristan and his assets.

A woman like Kris Jenner doesn't go through literal decades of drama and be formerly married to one of the most infamous attorneys in the U.S. without a few tricks up her sleeve... and fans cannot wait to see what she rolls out with next.