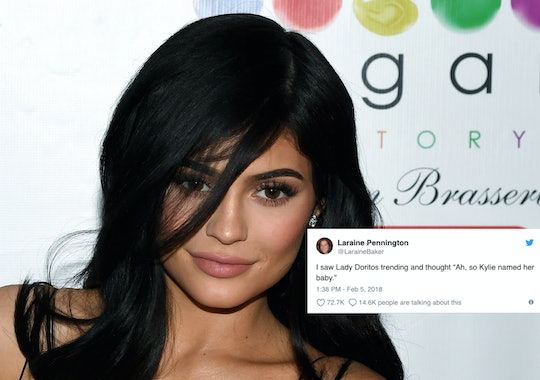 After months and months of rumor and speculation, Keeping Up with the Kardashians' Kylie Jenner finally put her fans out of their misery and announced the birth of her baby girl, her first with boyfriend Travis Scott, on Sunday. The Kylie Cosmetics mogul even shared a full 11-minute video with fans, detailing sweet moments throughout her pregnancy, as well as the baby's birth time and weight — but there was one crucial detail missing. Jenner hasn't shared her baby's name with fans yet, and these tweets about Jenner's baby name perfectly sum up the misery of waiting for the reveal.

Just to catch you up: there's already been plenty of speculation around Jenner's baby's possible name, with many fans believing the child might be called Butterfly, or Mariposa (i.e., still "butterfly," just in Spanish), or Posie. The "Butterfly" name rumor comes from the decorations placed around the baby's nursery (as well as a butterfly necklace Jenner is seen wearing in her 11-minute video), and the Posie clue comes from the title of Kylie Cosmetics' latest lipstick shade, named "Posie K."

Still, if the rumors about Kim Kardashian's baby name were anything to go by — they were all very incorrect — we still might be nowhere near guessing Jenner's baby's name. It's all very frustrating, which is where the internet comes in, full of ingenious guesses and commiserating jokes. Check out some of the best tweets about Jenner's baby's name below.

There Have Been A Few Solid Guesses

People are seriously invested in Jenner's baby name choice, which might explain why she's keeping her cards close to her chest at the moment.

Pretty Much Everyone Is Dying Of Impatience

I mean, come on. It's been a solid two days, Jenner, the people need to know.

There Are Already Some Business Predictions Happening

Any expecting mom who doesn't want their child to be asked, "Oh, like Kylie Jenner's kid?" whenever they introduce themselves is sitting on pins and needles right about now. Understandably.

Personally, I'm just happy Jenner finally confirmed her pregnancy — even if she technically did it after the pregnancy was over. And considering that she left the public waiting throughout her entire pregnancy, I wouldn't be surprised if she left the world hanging a little longer while she enjoyed her first few days with her little one. After all, in her message explaining her silence over the last few months on Instagram, Jenner made it clear she valued privacy when it came to her child, writing:

I'm sorry for keeping you in the dark through all the assumptions. I know you're used to me bringing you along on all my journeys. My pregnancy was one I chose not to do in front of the world. I knew for myself I needed to prepare for this role of a lifetime in the most positive, stress free, and healthy way I knew how. ... I knew my baby would feel every stress and every emotion so I chose to do it this way for my little life and our happiness.

The video Jenner shared of her last nine months would also suggest Kylie Cosmetics creator will probably be more careful and conscious about how and when she invites fans into her family life. And considering how much people are already invested in the name she chose, that seems perfectly sensible. Here's to waiting to find out whether we'll be hearing more in the future about a Posie, Mariposa, Butterfly, or Kiwi. Or, you know, a Lady Doritos. No pressure, Jenner.