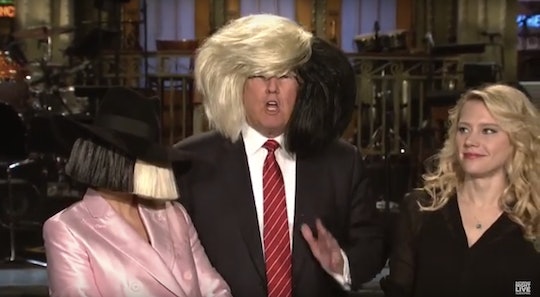 Saturday Night Live is a tightly run ship and current cast members have been pretty quiet so far about what to expect from an entire episode hosted by Donald Trump. But these these leaked SNL promos for Trump’s episode show we’re going to get a lot of hair jokes this week. Sure, they are all rejected sketches and promos, but it still looks like viewers will get a lot of what they expect from a Trump-tastic show this week.

At first, NBC was pretty quiet about the show, probably because of the controversy surrounding having Trump host in the first place. As soon as the decision was announced, fans of the show and various political groups have petitioned Lorne Michaels and NBC as a whole to cancel the appearance. The outcry centers around Trump’s controversial statements about women and his comments about Mexicans this summer. After his statement that Mexican immigrants were bringing crime and drugs, and classifying them as mostly rapists, NBC issued a statement that essentially cut ties with the GOP Candidate:

At NBC, respect and dignity for all people are cornerstones of our values. Due to the recent derogatory statements by Donald Trump regarding immigrants, NBCUniversal is ending its business relationship with Mr. Trump. To that end, the annual Miss USA and Miss Universe Pageants, which are part of a joint venture between NBC and Trump, will no longer air on NBC. In addition, as Mr. Trump has already indicated, he will not be participating in The Celebrity Apprentice on NBC. Celebrity Apprentice is licensed from Mark Burnett’s United Artists Media Group and that relationship will continue.

However, Trump is great for ratings. And the leaked promos this week have only fed the anticipation.

A lot of viewers think cast members should just “Nora Dunn" the episode, refferring to a 1990 episode in which Dunn, a cast member, and musical guest Sinead O’Connor boycotted an episode that was to be hosted by Andrew Dice Clay, who they deemed a misogynist. Dunn wasn’t hired the next season, which goes to show that it might be in the best interest of cast members to not take a stance on who’s on hosting and just get on with the show. Even Jon Lovitz remembers Nora Dunn’s boycott as being a bad idea.

Others have been asking about diversity on SNL, again, noting that if the cast had Hispanic members, maybe there’d be more pushback.

At this point it seems unlikely that a cast member will boycott, especially since the promos have gone out, but time will tell. If no one does, it could be that they feel it wouldn't have an impact, they think Trump will actually hurt his image by not performing well, they feel boycotting would hurt their own careers, or they're letting themselves be led by the old adage that showbusiness is showbusiness. It'll certainly be an interesting Saturday night.