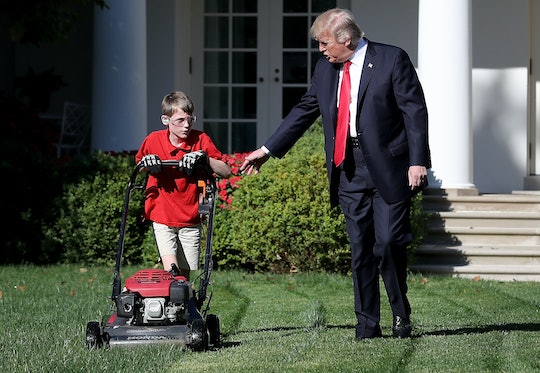 If you've been anywhere the internet or a cable news broadcast this weekend, you've likely already seen the images of Frank Giaccio, the 11-year-old boy who offered to mow the White House's lawn and was granted the "privilege" of doing do. Although his hardwork is admirable, people just couldn't resist sharing memes of Frank ignoring Donald Trump while he was mowing the lawn. They're all pretty hilarious — and not making fun of Frank at all, but of Trump's move to try to talk to the kid over the loud noise of a lawnmower.

If anything can make you believe in America again, it's these hilariously awful jokes about Trump yelling at the poor kid while he's trying to work. Anyone who's ever been around a lawnmower or done it themselves would know better than to try to bother the person at the helm. Trump's probably just not used to being on the grounds with "the help."

Back in August, Giaccio wrote to the president saying, "It would be my honor to mow the White House lawn some weekend for you. Even though I'm only 10 I'd like to show the nation what young people like me are ready for." (Giaccio had a birthday between writing his letter in August and mowing the lawn on Friday.) He even waived his regular $8 fee.

Here Are Some Of The Best "Frank & Trump" Memes

And Here's The Whole Clip...

It's certainly cute that they invited the kid to mow the lawn. Trump said of Frank's efforts, "We're lucky. That's the real future of the country." He's right — hard work is the real future of the country. Someone in the White House press office obviously missed the irony of having a child mow the lawn, without compensation, and perform a job that is overwhelmingly done by undocumented workers these days, according to the Pew Research Center.

Doesn't the Trump administration loathe people who accept "handouts" and employ unauthorized workers? Lest you get riled up at the idea of politicizing Frank's entrepreneurial spirit, the administration was all about it. Trump's favorite channel Fox News has been running the clip for almost 24 hours, using it as a symbol of the president's likability and love of the fabled American Dream.

While taking questions from the podium in press briefing room, reporters asked Frank if he'd be open to mowing their lawns. Press Secretary Sarah Huckabee Sanders used it as a chance to slam the media, advising Frank, "Make sure these guys pay you top dollar. Tell them if you're part of the press, you have a special deal that's double the normal rate. I think that's pretty fair."

Ah, yes, teaching young children to distrust and mock journalism. Makes me feel all warm and fuzzy inside.

This is the second child that the Trump administration has introduced to America in an effort to remember the "forgotten men, women and children that we're here to serve and the president is fighting for," as Sanders put it earlier this summer when she promised to read the love letters Trump supporters sent to the White House.

The first was the very real 9-year-old Dylan Harbin, who wrote:

My name is Dylan but every body calls me Pickle. I’m 9 years old and you are my favrit [sic] president. I like you so much I had a birthday about you. My cake was the shap [sic] of your hat.

The press core initially questioned the authenticity of Pickle's letter, given the congratulatory nature of its contents. In defense of the Pickle Truthers, it would not have been the first time Trump allegedly concocted praise for himself. In the end, Dylan was found to be a real person.

So if you enjoyed watching Trump interact with Frank, the lawnmower kid be forewarned: There are likely many other small children the administration plans on parading through the White House grounds.