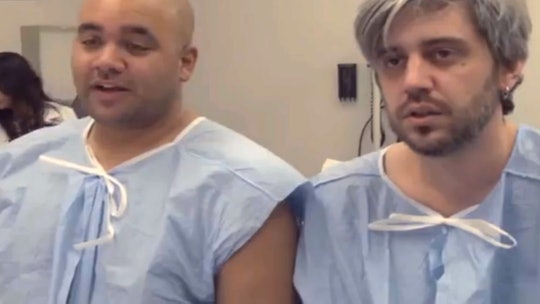 It’s an age-old question: Is giving birth really more painful than when men get hit in the you-know-what? As it unsurprisingly turns out, yes. Yes, it is. And this became even more clear after these men tried labor pain simulators to prove women wrong. And, boy oh boy, were they in for a surprise.

To be fair, it’s pretty much impossible for men to truly understand just how painful labor is and what contractions actually feel like. But in one video, shared by Bored Panda this week, two husbands opted to see what childbirth feels like because women tend to “exaggerate everything” and they wanted wanted to show their wives that they could handle it. And they may have walked into the doctor’s office ever so confident, but they walked out exhausted, feeling compelled to thank their own mothers for birthing them many years ago.

During the early labor stage of the simulation, one of the men says, “I’ve got to remember my breathing” as they both cringe in pain. As the "contractions" start to intensify, the men start groaning, kicking, and grabbing their wives’ hands for support.

“It feels like someone is taking a saw and just carving up my abdomen,” one of the men says, totally shocked that the simulated contractions were only at level four out of 10.

"I’m going to throw up," the other man says when the doctor informs that during actual labor they’d be having more waves of contractions right now.

After more screaming and panting, the men then declare that "it was not good" and said it "sucked." They then admitted defeat and said that it was a lot worse than they expected it to be.

"I felt like I was having a baby," one of them said once the simulation ended.

"That was horrible," one of the husbands concluded. "Mom, if anything that I just experienced is anywhere close to what I did to you all those years ago, I’m sorry, you’re like a superhero. You’re one tough momma."

Watch the hilarious failed experiment below:

It's not clear from the video how long these men experienced labor pains, but early labor can last for approximately eight to 12 hours and active labor can last an additional three to five hours, according to the American Pregnancy Association. So it's safe to say, these guys got off easy.

According to Parents, some moms have described childbirth as the "most excruciating pain" they've ever experienced or that it felt like "having your insides twisted, pulled, and squeezed." Needless to say, it's a painful experience. So, men, please watch this video the next time you think women are exaggerating. They're definitely, definitely not.

More Like This
41 Strong & Sweet Baby Boy Names That Start With “K”
No One Is Angrier About The Taylor Swift Ticket Disaster Than Moms
The Best Black Friday 2022 Deals For Moms
Pelvic Pain During Pregnancy: What Causes It & How To Deal With It