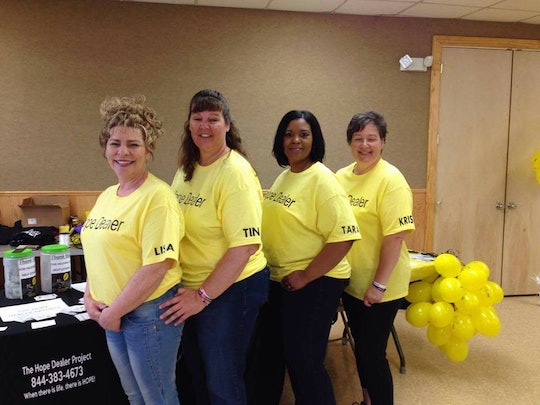 These Moms Are Helping Opioid Addicts & Their Families By "Dealing Hope"

The opioid epidemic will go down in history as one of the deadliest plagues to sweep the United States. People are dying by the thousands and many are left feeling overwhelmed and helpless in the face of it. But rather than take their tragedies lying down, these moms are helping opioid addicts and their families by "dealing hope" in their hometown of Martinsburg, West Virginia, according to People. In the state hit hardest by the crisis, their efforts are filling a dangerous void.

Tina Stride, Kristie Plotner, Tara Diggs-Mayson, and Lisa Melcher have each been personally impacted by the devastation left behind by opioid addiction, with some even losing a child to it. After bonding over their shared experiences with an addicted family member, they told People that they decided to turn their pain into passion and power and do what they can to help those in their community who are struggling with heroin addiction. .

There is certainly need for this kind of help. In 2016 alone, more than 64,000 people died of drug overdoes in America — the majority of which involved synthetic opioids, heroin, and common opioid painkillers, according to the Centers for Disease Control and Prevention. To put things in perspective, that's more deaths than those in a single year caused by shootings, car crashes, and HIV/AIDS in a single year, according to Vox. Additionally, The Guardian reported that West Virginia has been hit worse than any other state in the country.

The four women first came together in February of 2016, according to People, at their town's first Narcotics Anonymous meeting, a 12-step program for families of addicts. By December of the same year, the Hope Dealer Project had grown to include a Facebook page, a toll-free number, and non-profit status. Unfortunately, though, not everyone with a problem feels comfortable reaching out for the help that they need. Mayson told local news station WDVM TV:

Even those addicts who do come to them for help have concerns, Stride told People that they will say things like, “How can you tell me I can get better with what I’ve done? I’m worthless. I’ve cheated, I lied, I stole from my family.” But she is quick to reassure them that recovery is possible, saying, “Your past is your past, you can’t change it. Just show how good you can be. You’re going to have to fight hard, dig deep.”

For those truly willing to fight, the Hope Dealers provide gas, plane tickets to and from rehab, a bicycle for transportation, really anything that their clients need to recover. They also connect addicts with detox and treatment centers, as well as sober living facilities. Costs are partially covered by donations, but much of it is covered by the women themselves, according to People. Money is often in short supply, but that doesn't stop the Hope Dealers from springing into action when someone comes to them for help.

The biggest problem that the Hope Dealers — and the rest of their state — are facing is a lack of access to help. David Grubb, a former senator in the West Virginia legislature, explained to The Guardian that the state simply does not have the funds to treat all of the people who need it:

One of the states that’s richest in natural resources is one of the poorest in terms of social services, public education, all of that. It’s a travesty that we have allowed the powers that be – which tend to be coal, oil and gas – to reap tremendous profits from this state and not put back enough to fully fund the infrastructure that we need.

Fortunately, the Hope Dealers are there to help, as they told WDVM TV:

When they reach out to us we tell them we're right here, and we aren't going anywhere. We are going to help you as much as we can to find you a place. That's the hope dealer, we're the new dealers in town. We deal hope.

While all of the needs in their area cannot be met by these women alone, they offer something that is perhaps just as important as care; they offer hope. In the face of such an overwhelming crisis, hope is a priceless commodity.