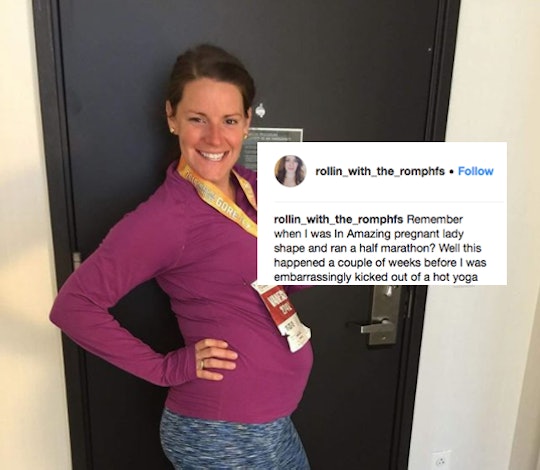 Finding a safe space to exercise can be tough, especially when you're pregnant. Some people have a lot of *feelings* about expecting parents who work out throughout their entire pregnancies, even though most doctors advise people to stay active during each trimester. Although it's really no one's place to dictate how and when a pregnant person exercises, there are plenty of instances of pregnant people being shamed for working out, like these moms who claim they were kicked out of yoga class for being pregnant.

Hayley Ross, a midwife, claims she was recently booted from Yoga Shack, a hot yoga studio in London, for being pregnant, according to CBC London. An instructor at the studio reportedly told Ross, who is due on Jan. 5, that her bump was a "distraction" to other students, according to Ross' account of events. Yoga Shack did not immediately respond to Romper’s request for comment, but the studio's owner, Lisa Shackleton, told the CBC in a statement:

For me, that is our policy. Your occupation doesn't determine how your unborn child can react to the heat. Not only am I concerned about the health of her and her baby, but I'm also concerned about our staff teaching the class and other members in the class. There are other people who are worried for that person. It's a private journey on your mat but you're also in a room full of people. I don't want people anxious about whether or not she is going to faint.

Ross explained, according to Cafe Mom:

She told me I was a distraction, that her other clients weren't happy about me being there. So that was it.

Ross' account is a bit startling for a few reasons, but especially because no expecting parent should be body-shamed or discriminated against for being pregnant.

Not to mention the experience was quite humiliating for Ross. She said, according to the CBC:

I was told I couldn't make my own decision. I felt horrified. I was a little in shock because I'd been practicing yoga there for so long. But they told me I couldn't continue.

Unfortunately, Vanessa Romphf, a mom and fitness instructor, said the same thing happened to her at the Yoga Shack in 2015. Once Romphf caught wind of Ross' story, she took to Instagram to share her experience with the studio.

Remember when I was In Amazing pregnant lady shape and ran a half marathon? Well this happened a couple of weeks before I was embarrassingly kicked out of a hot yoga class (after many previous visits) because I made others in the class uncomfortable... now @londonyogashack @yogashack is continuing to discriminate against pregnant women. @haylzjane86 had the same thing happen to her this week! I knew it was time to speak out against this behaviour. It is horrific that a yoga studio would not be willing to work with my medical professionals to accommodate people of all ranges and abilities. I was pregnant! Not unable to regulate my physical abilities or suddenly numb to understand my exertion level.

Of course, some people are wondering if it's safe for pregnant women to practice hot yoga in general, which might explain why Yoga Shack allegedly asked Ross and Romphf to leave the studio.

A person on Twitter said in response to Ross' story:

Hot Yoga is 100% not safe for a pregnant lady, barely safe for me a healthy young hungover human. Would you take your infant child into a sauna for 1.5 hours for a work out?!? Get bent! In a cool climate controlled regular yoga studio for a few months.

As for whether hot yoga is safe for pregnant people, the answer is different for each individual. Although some researchers claim that hot yoga can be especially dangerous during the first trimester of pregnancy due to "relaxing blood vessel walls," which can cause fainting and dizziness, according to U.S. National Library of Medicine National Institutes of Health, there's no definitive answer regarding how safe it is to practice hot yoga while pregnant. So, it seems like practicing hot yoga while pregnant is a personal decision that should be discussed with a trusted doctor or medial professional beforehand.

Romphf, however, believes her removal from the class has nothing to do with safety. She argued, according to the CBC:

I had just trained for a half marathon. I was seven months pregnant. She didn't bring up safety at all with me. I told her I would have my doctor or my midwife call and she said 'No.' If her emphasis was on safety I would have been more understanding. But it was all about how I would make other people feel uncomfortable.

If Romphf and Ross were kicked out due to their pregnant bodies as opposed to a legitimate safety concern, it's definitely not OK. Plus, some people argue that although the studio had the right as a business to ask Ross and Romphf to leave, they should have done it in a more respectful manner:

Another person added: "Wow, eh? How alienated from our bodies are we?"

Even if people who don't agree that expecting parents should practice hot yoga while pregnant, it's not hard to get on board with the idea that all pregnant people deserve respect and kindness. Hopefully Ross and Romphf's stories will bring awareness to the shame pregnant people can experience on a daily basis.