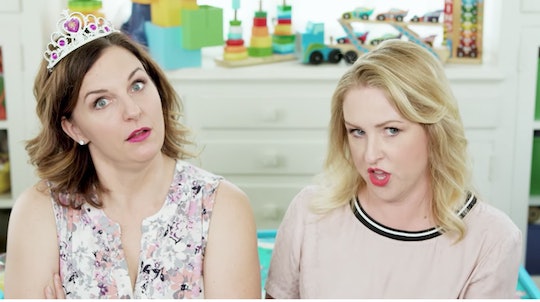 As parents, we're bound by an unspoken rule to watch our kids' favorite movies with them over and over again. However, after the 50th time watching the same six animated Disney movies — and having already memorized all of the songs, of course — it's difficult not to start dissecting the plot lines, characters, and overall themes of these classic hits. So I think it's safe to say these moms venting about why Disney princess movies don't feature mothers will have you in stitches — because they're actually on to something.

Kristen Hensley and Jen Smedley, the funny moms behind the website I Mom So Hard, hit the nail on the head in their latest vlog rant titled" "I Princess So Hard." In it, the Los Angeles mothers point out a valid reason moms are often absent (or killed off) in the majority of Disney princess movies.

"I thought the moms died just because moms complicated the story," Smedley says in the video. "Seriously, like if a mom comes into a story that's 90 minutes long, she's going to clean that sucker up and it's going to be over in 7 minutes."

You know, they do have a point. For exampled, in Frozen, if Elsa and Anna's mom wouldn't have been on that ship, she would have shut down her daughter's nonsense before it even had a chance to start.

“Elsa, you get out of that room, you’re gonna have to deal with it,” the Frozen mom would have nagged, according to Hensley and Smedley. “Life is hard. Put on your gloves. Everyone’s got something. Suck it up! Don’t touch your sister! Now get out here and go to soccer practice."

And you're telling me Jasmine's mom would have been perfectly OK with her princess daughter riding off with some street rat in Aladdin? Not happening.

“Oh, Jasmine. You think you’re going go on a magic carpet ride with this guy?” they say in the video. “Let me tell you something, Jasmine. If you rub his lamp, it is not a genie that comes out!”

Sure, including more mothers in Disney princess movies might end the bulk of the conflict. But the damsels in distress would have positive role models, instead, who would show them real happiness doesn't come in the form of a charming and dapper prince.

“You don’t want to have it in her head that some man’s gonna come in and magically make your life happy and better,” Hensley explains. “Because let’s be honest about that," Smedley pipes in. "We all want our girls to feel like a princess — but with an advanced degree and a love of travel.”

(Seriously, can I be best friends with these moms? )

I have to give Disney credit, though; they've made an honest effort in recent years in trying to feature moms more. Take Brave, for example: It's a story about the complicated, but unyielding bond between a mother and her strong-willed daughter. It wasn't a simple love story of a prince rescuing a princess. Even in Tangled, Rapunzel's "mother" played a huge role in her life and in the plot of the story. OK, so Mother Gothel was, in reality, an evil witch who stole her from her actual parents. But what's a princess movie without a little conflict?

And hello, the mom in Moana was instrumental in allowing her to sneak off the island by boat (against her father's wishes, mind you.) She also helped Moana understand why her father was so hellbent against her leaving in the first place. Heck, even in Frozen, we at least got a little backstory about how Elsa and Anna's mom met her untimely end.

Still, Disney could use more work in not killing off moms all of the time. Here's an idea: Bring in Hensley and Smedley to voice a couple of feisty Disney mamas. I would pay good money to see that. And judging by their video's more than thousands of views, I'm willing to bet others would, too.