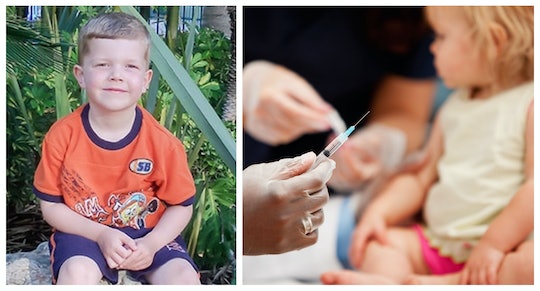 Two Very Good Reasons To Vaccinate, From Moms Who Have Stories To Tell

Flu vaccines were on Serese Marotta's mind ahead of every winter, but she thought of the virus as nothing more than a bad cold, something doctors could easily treat. "Even though I always vaccinated [her children] and was pro-vaccine, it wasn't until my son passed away I realized this happens all the time," she told a crowd at the Mom 2.0 Summit.

Her son Joseph started throwing up on the school bus one day when he was 5, back in 2009. Several weeks followed in the children's hospital, where an initial flu test came back negative and he was diagnosed with pneumonia. Along the way, Marotta always trusted that whatever her son had, the doctors could fix it. "That morning I was talking to Joseph in the hospital, we were talking about Halloween costumes, because he loved Star Wars," she remembers, "and at that point he coded, but as a mom I was thinking this is not happening."

Joseph was the 85th child that year in the U.S. to die of influenza.

"That's not something a parent should ever experience," says Dr. Len Friedland, director of scientific affairs and public health, vaccines, at GSK, a presenting sponsor of Mom 2.0. "As a pediatrician I've seen what vaccines can do" to prevent death and illness in children.

Six million deaths are prevented globally each year due to vaccination, per a 2003 Vaccine study. Eight thousand flu deaths were prevented by flu vaccinations in 2017-18 according to the CDC, while anywhere from 37 to 186 children die of the flu each year in the U.S., but vaccination rates remain low: only 37.1 percent of children 18 and under were estimated to have gotten the flu vaccine for that period. In 2016, just 27 percent of adults 19 and older were vaccinated for Tetanus/diptheria/pertussis (known as "Tdap").

At the Mom 2.0 Summit, Friedland fielded concerns about the manufacturing and contents of vaccines, affirming that vaccines are safe. As a pediatrician, he says he knows every parent wonders "What can I do to keep my children healthy? This is why it's important to speak to your doctor to find out what you can do."

"Everyone tends to think vaccination is personal," Marotta says, but "learning that it protects others is important, too." She wants parents to be educated about the available vaccines, and to make sure their children's immunizations are up to date.

"As moms we all know that when something happens to our children, we get into that other lightning mode — get my daughter what she needs," says Patsy Schanbaum, the mother of a Jamie Schanbaum, a meningitis survivor and U.S. Paralympian.

Jamie was 20 when she began to feel unwell, and at no point thought she had meningitis.

"By the time I was admitted to the hospital," she remembers, "the doctor was telling my sister to ask 'Where's your mom? She needs to be here.' I eventually saw my limbs decay before my eyes."

Today, she advocates for immunization through The JAMIE Group (#VaccinesCauseAdults, she appended a recent tweet). She was on the 2011 USA Paralympic cycling team, and had a namesake bill passed through the Texas legislature in 2009 requiring college students to be vaccinated for meningitis — Senate Bill 819, otherwise known as "The Jamie Schanbaum Act."

There are two vaccines that work together to block five strains of meningitis — crucial for young adults, 5 to 10 percent of whom have meningitis bacteria in their noses.

Jamie was lucky to survive, and her story in the years since is incredible. But her mother Patsy hasn't forgotten the days during which she wasn't sure how her daughter would fare. "It's just a flash, but I could tell you like it was yesterday. I more than not know people who do not have surviving children."