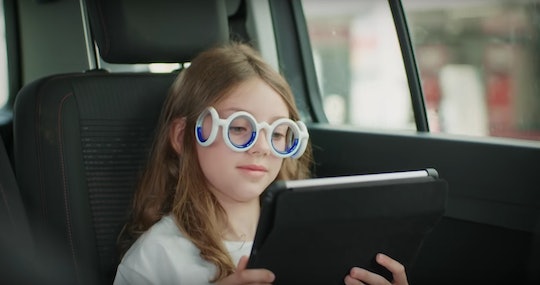 The quickest way to suck what little fun resides in road trips is a case of motion sickness in the backseat. Between the "are we there yets," the boredom, and sibling scuffles, the last thing parents want to hear is that a particularly scenic byway is making a little one nauseous. Thanks to a funky design, one company feels its motion sickness glasses could be exactly what the doctor ordered to settle tender tummies.

Created by the European car manufacturer Citroën, these four-ringed, lens-less spectacles claim to ease motion sickness within 10 minutes, which is caused when the brain receives conflicting information from inner ear and other sensory systems, according to Mayo Clinic. Instead, the rims of each ring are filled with colored liquid to mimic the same movement as the fluid in the inner ear, which affects balance. Brains respond similarly to the fluid, helping the cleverly named Seetroën specs create an artificial horizon when bendy or bumpy roads obscure the one in the windshield.

I don't know about you, but it's not really a road trip until my daughter pukes, preferably when we're in the middle of nowhere where there's no bathroom to satisfy her delicate sensibilities. Despite her very loud protests, pulling over and letting it rip has often been the solution — if she can make it, poor child. I can totally see myself putting a pair on her and praying for the best. If your child wears eyeglasses like she does, just pop them over the top and they are just as effective. I'm sure the Hertz attendant in San Francisco probably would have appreciated the effort last summer.

Of course, there are other ways to avoid car sickness. Namely, not taking road trips. According to the Mayo Clinic, children ages 2 to 12 are particularly susceptible and if a little pre-planning, like carefully timing meals and reducing sensory input, doesn't work, you have to move to other solutions once it hits. Other methods include putting down the iPad (more punishment for me), dosing them with Dramamine or Benadryl (ugh), force feeding them ginger chews they're too young to appreciate, aromatherapy with mint or lavender (please, no), or acupressure wrist bands (perhaps).

For the record, sailors in the south of France have been using wonky glasses like this for years, and when Citroën partnered with Boarding RingTM to create this new product, their efficacy shot through the roof to 95 percent. I say if it's good enough for hardened seamen on the open ocean, it's good enough for pampered kids cozied up in the back seat enjoying good music and blasting air conditioning.

Despite their, um, unique appearance — guaranteed to add some entertainment to traffic jams, at least — Citroën commissioned Paris-based design studio 5.5 to make them look as slick and feel as smooth as possible with soft-touch plastic. It's a nice touch — I'd take anything that would offer relief without dosing our daughter and would prevent us from peeling out the floor mats and scrubbing seats again.

Personally, I look forward to the added entertainment value Seetroën glasses can contribute to the trip when I feel like we'll never get out of the car. The girl is cute enough as it is, and if these goofy specs inspire her to take a selfie or two and help her feel better, I'm all for it. They're out of stock right now — I'll thank all those road tripping Europeans for depriving her — but you can purchase them on Citroën's lifestyle website for €99, or about $115, when the store restocks in September. It's never too early to plan for next summer's long haul to Grandma's house.