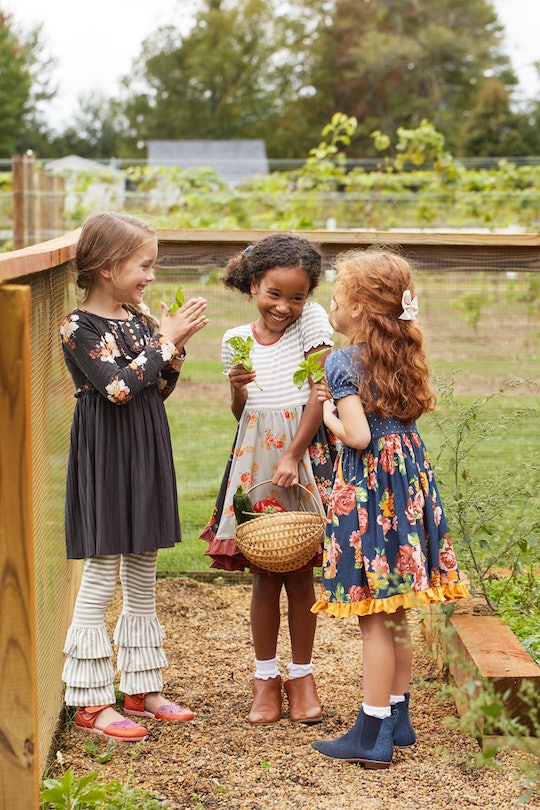 There's no question that the world cannot get enough of Chip and Joanna Gaines. The Texas natives became household names through their TV show, Fixer Upper, and went on to release books, home decor lines, and yes, even children's clothes. (The couple does have five of their own, after all.) However, there's even more exciting news in store, as new additions to Joanna Gaines' kids clothing line are finally here, and they are going to make you so excited for the holiday season.

Earlier this year, Country Living reported that Gaines signed on with children's retailer Matilda Jane Clothing to create her own line of kids' and toddlers' wear. Given the success of the line, Gaines is releasing another collection with the company next month, according to a press release.

“I wanted this collection with Matilda Jane to reflect the joy and beauty that comes with this season, so you’ll see richer colors and nostalgic patterns in a lot of these pieces,” said Joanna. “And of course we worked in a few things for baby boys, so there’s something for everyone," Gaines said in the press release.

“Our last collaboration with Joanna Gaines was such a hit, we’re thrilled to do it again,” Madeline Katzel, Matilda Jane’s design director, added. “This time, we’ve expanded our line to include a darling bodysuit and overalls for baby brother, as well as new layette items and even an easy maxi dress for women. We hope you love them all as much as we do!”

The Matilda Jane Clothing with Joanna Gaines December Collection will be available on Dec. 1, and customers can visit their local Matilda Jane or order pieces online.

When the line first came out, Country Living reported that Gaines said a lot of her inspiration came from her own family, and life with them on the farm. “The whole inspiration for this new collection was summer here out on the farm — the long days, the hazy sunsets, kids running around just being kids," she said. “The whole idea of being inspired by life on the farm is really rooted in an effortless, easygoing lifestyle, and that’s the feeling I hope people have when they’re wearing these pieces.”

This isn't the only big comeback the couple has announced this year.

On Nov. 10, People reported that Chip and Joanna shared that they would indeed be coming back to TV, just a few short months after their last episode of Fixer Upper aired at the end of 2017. However, it's not just another TV show. The couple is reportedly working on developing their own media network.

John Marsicano, a spokesperson for Magnolia, told People: “We’re excited to share that we are currently in the early stages of talking with Discovery about a lifestyle-focused media network for Magnolia. The details surrounding this opportunity remain a work in progress, but together, our hope is to build a different kind of platform for unique, inspiring and family-friendly content.”

During an appearance on Jimmy Fallon, Chip confirmed the news, saying:

We signed a non-disclosure and it said quote unquote you can tell your mother but that’s it... So mom, I just wanted to make a quick announcement, we are coming back to television. You are going to get to see the kids grow up, you are going to see us, well maybe a six-month delay like the rest of the world, but we are excited to be back.

Whether it's entertainment, shopping, design or decor, there's nothing that the Gaineses can't do, and it's clear that their talents are in seriously high demand.