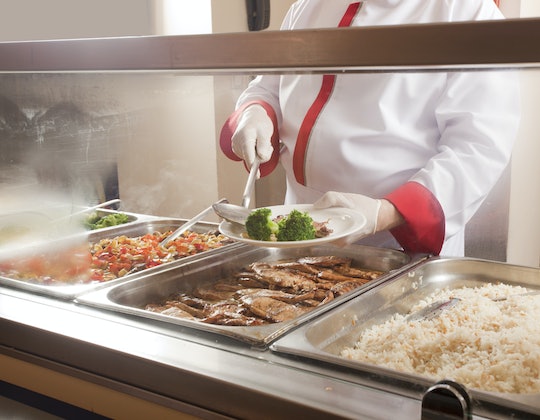 The Trump administration made yet another move to dismantle Obama-era policy on Thursday, and like many others, it could directly impact the health of America's children. The United States Department of Agriculture is extending "flexibilities" to the Child Nutrition Program, and experts agree that the new school lunch guidelines are unhealthy and unnecessary. Most schools have no trouble following the rules implemented by the Healthy, Hunger-Free Kids Act of 2010, but now, they can skip three important rules for the next two years, and the USDA is angling to extend that even further.

Under the new rule, schools are no longer be required to serve whole grains, sodium limitations have been relaxed, and kids will now be offered sweetened low-fat milk, rather than fat-free. Secretary of Agriculture Sonny Perdue announced his intention to ease these restrictions in May, claiming that kids are throwing away school lunches, but American Heart Association CEO Nancy Brown told NBC News that's not the case. "In the last five years, nearly 100 percent of the nation’s participating schools have complied with updated school meal standards," she said. "Kids across the country have clearly benefited from these changes. Their meals have less salt, sugar and saturated fat, and they eat 16 percent more vegetables and 23 percent more fruit. Why would the USDA want to roll back the current standards and reverse this excellent progress?"

A document filed with the Federal Register justifies the guidelines by claiming that it would take food manufacturers "at least two to three years to reformulate and develop food products" that meet the five-year-old standards, a process that involves "innovation of new products, product research and development, testing, commercialization, launch, and marketing," as well as challenges of "developing technologies to help overcome consumers' sensory barriers" and the "low level of demand for these products outside of the school audience." However, according to NBC, the Centers for Disease Control analyzed implementation of the 2010 policies, and found that, by 2014, more than 97 percent of schools were offering whole grain options at breakfast, and 94 percent offered them at lunch.

The old sodium limits were far from excessive; according to The Hill, schools were originally supposed to get enforce limits of 935 milligrams per day in elementary schools, 1,035 milligrams in middle schools, and 1,080 milligrams in high schools. A tiered plan would eventually have brought those levels down to 640 milligrams, 710 milligrams, and 740 milligrams, respectively, by 2022. The new rule allows sodium levels of 1,230 milligrams, 1,360 milligrams, and 1,420 milligrams each. According to the USDA's 2010 dietary guidelines, children and adults should consume no more than 1,500 to 2,300 milligrams of sodium per day, depending on various health factors. High schools can now allow half of all students to come close to maxing out on their daily sodium intake from just one meal.

Whole grains are important; refined grains lack the dietary fiber that, according to the American Heart Association, can "help improve blood cholesterol levels, and lower risk of heart disease, stroke, obesity and type 2 diabetes," as well as making you feel full. And healthy eating affects other aspects of a student's life; the Brookings Institution found that schools that provide healthier lunches had students that scored an average of 4 percentage points higher on test scores. Students who qualified for reduced-price or free lunches — who are the most likely to eat school lunches — saw even bigger test score increases.

Perdue claimed in May that "schools are experiencing challenges" procuring whole grain products, despite the CDC's analysis showing otherwise. The citation of food manufacturers' challenges in the official ruling is telling, given that Perdue owns several agriculture-related businesses, including two grain marketing enterprises. Kids' health and test scores, it seems, come in second to manufacturers' inconvenience of creating whole grain grits without unsightly black specks in them. A USDA spokesperson provided the following comment to Romper:

USDA applauds the efforts of thousands of school nutrition professionals who are successfully offering nutritious and appealing meals to students. But some schools are still facing challenges, as even the data cited in the question suggests. The new rule ensures that options are available for local schools that need them to serve their student customers well.

We will continue to listen to our stakeholders and provide operational flexibility and technical assistance where needed in order to ensure their continued and long-term success in running these critical nutrition programs.

Only in Washington, DC can something be called a success simply because people are obeying direct orders. It’s no wonder that schools have tried to follow the rules under threat of lost funding. The simple fact that numbers in a spreadsheet say that schools are adhering to federal dictates is not an indication that the program is truly successful.