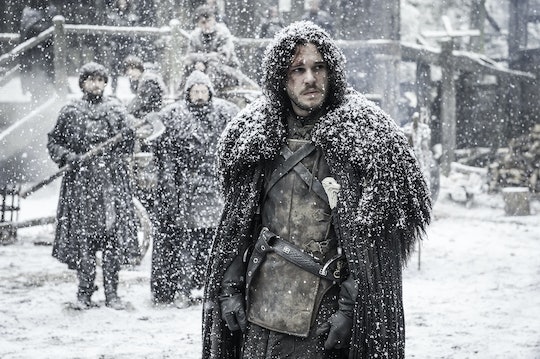 Night King & Jon Snow Theories For 'GoT' Fans To Obsess Over

A battle is brewing between the people of Westeros and the White Walkers, though not everyone understands how serious the threat is. Jon Snow was one of the first to realize just how dangerous the Walkers would be, and he appears to be the key to defeating them. In fact, he even seems to share some kind of connection to the Night King, the leader of the ever-expanding army of the dead. These Night King & Jon Snow theories on Game of Thrones seek to explore what the nature of that connection may be.

When Jon escaped from the Night King's forces with many of the wildlings at the end of "Hardhome," the Night King watched him go with what seemed like unusual focus. While the series' creators D.B. Weiss and David Beninoff explained during an "Inside the Episode" clip that the Night King was merely recognizing Jon as a threat in his own right, there could be something much deeper going on there.

The Night King has also shown an interest in Bran Stark that seemed similarly out of the ordinary, which could indicate that the Night King knows something about the Stark family or is preoccupied with them in particular. It's possible it's just a situation of game recognizing game, but that might not be all there is to it. For instance, it could mean...

The myth of Azor Ahai has appeared throughout Game of Thrones, with many characters speculated to be the legendary warrior reborn. An important part of the story is that Azor Ahai forged his powerful sword Lightbringer by plunging it into the heart of his wife Nissa Nissa. Reddit user TooTooVoo theorized that after Jon and Dany meet they will fall in love, but he will be forced to sacrifice her to create his own Lightbringer out of Longclaw and defeat the Night King with it. (Personally, I think it would be a lot more likely for Dany to sacrifice Jon; after everything she's been through, I don't think she'd be willing to die so easily.)

The Night King Was A Lord Commander

One theory from the books themselves is that the Night's King was the thirteenth Commander of the Night's Watch. According to legend, he declared himself king after falling in love with a female White Walker, with whom he ruled for thirteen years after taking over the Nightfort. Their rule was a horrifying one, and they were eventually defeated by the Starks — just like the current Night King might be.

Jon Is A Fire Wight

In an interview with Time, George R. R. Martin dropped an interesting piece of information: there are different kind of wights. The ones that most fans are familiar with are ice wights, but there are also fire wights such as Beric Dondarrion, who was resurrected thanks to the Lord of Light. Since Jon was resurrected in the same manner, that would mean he was also a fire wight. Since fire and ice are opposing forces, Vanity Fair speculated that this could give Jon an edge when he finally faces off against the Night King and his army of ice wights.

The Night King Was A Stark

There definitely seems to be overlapping history between the Night King and the Starks, with the books themselves putting forth the idea that the Night King is a Stark. There is a passage in the book series where Old Nan is telling Bran stories about the Night King and she says explicitly, "He was a Stark, the brother of the man who brought him down."

Jon Snow Is The Night King

This rides on the coattails of the last theory. If the Night King was a Stark, he could have also been a bastard named Jon Snow. He wasn't the Jon we know, but a much earlier ancestor with the same name. As pointed out by a user in the Asoiaf.westeros.org forums called Lord Martin, this could explain why Ygritte says that Jon has an "evil name" when she first meets him; the wildlings could remember that the first Night King was originally a man named Jon Snow.

Jon Snow Will Be The Night King

Another more tragic theory is that Jon will become the next Night King. In an attempt to the destroy the threat, Jon could actually end up taking his place. Hopefully he would be a more benevolent zombie king, but if not, this could end up mirroring the stories of Brandon the Breaker and the Night King who was defeated by his Stark brother. If Jon becomes the Night King, perhaps his brother Bran will be forced to be the one who destroys him.

There are so many threads linking the Night King to the Starks that there must be some significance to all of it. It even has a little bit of a Harry Potter and Voldemort vibe: neither can live while the other survives. A Stark may have been integral in the creation of the Night King, and therefore just as important in his eventual destruction.