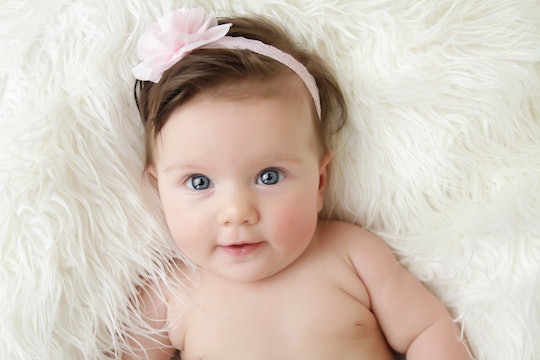 I love old wives' tales. Sure, I don't give them a lot of credence, as I'm sure is the case with many millennial women, but they're just so much fun. And some of them are downright sticky. Think about it. Have you ever watched where you were walking and avoided a crack in the pavement? You know why — it would break your mother's back if you were to step there. There are tons of old wives' tales about babies and their birthdays, and they're some of my favorites, like the old wives tales about being born in the spring . They might not be as popular as stepping on cracks, but they're still pretty great.

Babies born in spring are actually on the rarer side. While February boasted the lowest birth rate, April isn't far behind, noted a 2010 LiveScience article. And those statistics seem to have stuck, according to Baby Center. It's posited that the June and July period which brings babies in or around April is simply too hot for many regions to enjoy the sweaty activity required to make children. This low rate makes it a period rife for mythology and superstition. If there isn't a huge amount of babies born in a community, everything they do will be closely scrutinized, leading to some pretty fantastic beliefs, such as the belief that babies born in April are wildly unpredictable, noted Baby Lore.

I am a spring baby, myself. In fact, my birthday, in the event you'd like to send chocolate or wine, is April 20. Yes, you read that correctly — 4/20. (It's easier to remember before it happens than on the day of the event.)

That means I'm one of those wildly unpredictable April babies. I also gave birth to a spring baby. An adorable spitfire of a human who just eked in the beginning of May, but who seems more April-ish to me. This is why the old wives' tales about being born in the Spring are especially interesting to me — and probably my poor, beleaguered winter-born husband and our son who constantly asks, "Why is Mama so weird?"

There might be a reason for that, young son of mine.

Now, the Scots have a terrible and depressing old wives' tales about being born in spring, but it's really old, thankfully. According to Baby Lore, druidic and early modern Scots used to say "born in May, bairns die and decay." First of all, fun fact: many of the bloodiest battles and harshest famines occurred in the spring in Scotland. The battle of Culloden, which left a full third of the men of Inverness dead, happened in the middle of April in 1746. I'm going to go out on a limb here and say that if no one is there to hunt, gather, and work the fields, a nursing mother or birthing mother is probably going to have a crappy outcome for her pregnancy. Thankfully, I don't see any Jacobite uprisings coming up in the next few months.

I spoke with my friends to see what they've heard from their nanas and mawmaws, and I was hit with a veritable wealth of superstition.

According to my friend Nia, as per African American tradition, if your baby is born in May or June, they're going to be crappy sleepers. And from my Chinese in-laws? A baby born in April or May means that they won't get a cold in the winter the year they're born. To be fair, this was true for my tiny one. Gastroenteritis? Yup. But no cold or flu.

My favorite old wives' tale about being born in the spring has to be the one from my Finnish friend, Frejya, who tells Romper that babies who are born in May are the ones most likely to get their first kiss before they get their first chest hair. She has no idea where that one came from, but appreciates it all the same. As do I. How can you not?