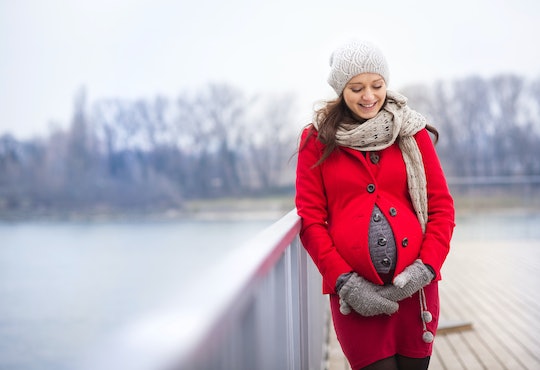 There are so many old wives' tales about everything out there. When I was a little girl, my superstitious MawMaw had a theory about everything, and everything gave her "cold chills." As I age, I often wonder if her superstitions were just excuses to get out of things — like swimming after eating or washing your hair every day. She had a few doozies for when I was pregnant, but none about a bun in the oven when it's cold out. (Even if others did.) Either way, here are some fun old wives' tales about being pregnant during winter solstice.

Old wives' tales from around the globe have some interesting thoughts about what it means to be pregnant or give birth at and around the winter solstice. For one thing, in Edwardian England, it was believed that if you were pregnant during winter, and gave birth during the winter, the baby must not leave the house for the first six months of life, or else they would fall ill, according to Baby Lore by Rosalind Franklin. If you give birth on winter solstice, it means you're likely to be giving birth to someone who will become important. Auspicious characters are born on solstice, according to Belsebuub, a website dedicated to the modern and ancient pagan traditions.

According to Franklin's book, it's also unwise to weigh a baby born in this period. It's considered unlucky. I have no idea how to get around that at the hospital, but I'm going to start an old wives' tale about it being unlucky to weigh the pregnant mother around winter solstice because if she doesn't like the answer, she might slap you silly. It's a working idea, I'll come back to it.

If we go deeper into old wives' tales, which in the early modern period meant "midwives," and look at the literature, it seems that being pregnant and giving birth around solstice is apparently the number one cause of your king husband trying to disprove his paternity. In both The Winter's Tale and King Henry VIII, the very act of being pregnant and birthing in the dark of winter, particularly around the superstitious period of the winter solstice, meant that your liege and lover thought you were stepping out on him, and, in some cases, probably meant that he'd leave your child in the middle of the woods where a bear could run off and hunt the lackey — the midwife's husband — who abandoned your baby in the woods. Don't worry, there's always a helpful storekeeper around to find your kid and raise him or her. Although, your child will also fall in love with your husband's archenemy's son. He only has himself to blame.

The ancient Celts believed that the sun is a baby at solstice, reborn into the world to grow and bring light until it reaches its longest moment on summer solstice and then begins to age and die, slowly decreasing the minutes of light each day. One can only surmise that to be pregnant at this time of death and rebirth must hold significant meaning for both the mother and the child.

In the vein of old wives' tales, fertility, and pregnancy, just know that you're a freaking goddess no matter when you're pregnant. But having been pregnant myself during a few winter solstices, I'll tell you that the food is good, the movies are better, and yoga pants are definitely ready for relaxation. Even if you're just trying to figure out how to wrap presents with a huge belly getting in the way, or how to make fudge when you just want to eat it by the spoonful — it's pretty cool.