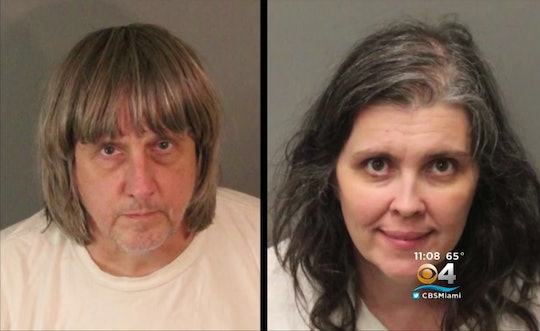 These Parents Allegedly Held Their 13 Children Captive For Years, & The Details Are Infuriating

Stories of neglect and abuse of children are never easy to fathom. How could any parent repeatedly harm their own child — and not see something wrong with the situation? Why didn't anyone speak up and get help for the child? Why does this keep happening? All of these questions are now swirling tenfold, after an unimaginable crime was revealed on Monday, resulting in a Southern California couple's arrest. That's because the parents allegedly held their 13 children captive for years, and it brings up serious questions about homeschooling regulations.

The malnourished children of David Allen Turpin, 57, and Louise Anna Turpin, 49, were discovered shackled in the basement of their Perris, California, home on Sunday, according to NPR. Romper has reached out to the Riverside County Sheriff's Department seeking comment from the Turpins' representative. The couple's 17-year-old daughter reportedly escaped and called police with a cellphone she had found at the house. Police said the teen was so emaciated that officers thought she was only 10 years old. According to a statement released by the Riverside County Sheriff's Department, the 13 siblings ranged in age from 2 years old to 29. "Deputies located what they believed to be 12 children inside the house, but were shocked to discover that 7 of them were actually adults, ranging in age from 18 to 29," the statement revealed. "The victims appeared to be malnourished and very dirty."

Furthermore, several of the children were reportedly shackled to their beds with chains and padlocks, and were kept in "dark and foul-smelling surroundings," according to a statement released by the Riverside County Sheriff's Department. The parents, according to the statement, "were unable to immediately provide a logical reason why their children were restrained in that manner." NPR reported the siblings were fed by law enforcement officers and taken to the hospital for treatment. As for David and Louise Turpin, they were arrested on Sunday and both charged with nine counts of torture and 10 counts of child endangerment. Currently, they are each being held on $9 million bail.

You might be wondering how the 13 children essentially disappeared into their own home and how it went unnoticed for so long. What about school — shouldn't there have been some sort of red flags there? Well, according to state records, the family home has the same address as Sandcastle Day School, The Boston Globe reported. The school was listed as a non-religious and co-ed institution, according to The Los Angeles Times, and David Turpin is listed as the principal. During the the 2016-17 school year, Sandcastle Day School was listed as having an enrollment of six.

So my question is this: If Sandcastle Day School is an official state institution, where are the regulations? Shouldn't there be some sort of check-in or followup? Because if someone physically came in to inspect, there's no way this type of alleged abuse could have went unnoticed. According to the Home School Legal Defense Association (HSLDA,) there are three legal options from which parents in California can choose: Homeschooling as a home-based private school, homeschooling with a private school satellite program, and homeschooling via instruction by a private tutor. However, regulations vary widely from state to state when it comes to checking in on kids' academic progress — as well as their wellbeing. In Pennsylvania, for example, the regulations are relatively strict, according to HSLDA:

Your child’s portfolio must be submitted for an annual written evaluation by (1) a licensed psychologist, (2) or a teacher certified by the state (with two years of teaching experience), (3) or a nonpublic school teacher or administrator (who must have at least two years’ teaching experience in the last 10 years in public or nonpublic schools). At the request of the homeschooling parent/supervisor, a person with other qualifications may conduct the evaluation with the prior consent of the local superintendent. The evaluation must be based on an interview of your child and a review of the portfolio, and it “shall certify whether or not an appropriate education is occurring.”

So in Pennsylvania, a yearly in-person interview of homeschooled children is required. Other states have similar requirements. However, in California, where the Turpins live, there is no such regulation. It seems the only way any government agency might have known that something was awry was if someone called CPS on the family. "There’s one way the government can check in on home-schooled families: by sending social workers," an in-depth Slate article reads. "These visits typically happen only when officials get a tip from a concerned neighbor or have other reasons to suspect neglect or abuse."

Barbara Knox, a pediatrician with the University of Wisconsin who specializes in child abuse, told Slate that parents who exhibit a pattern of abuse often pull their kids from school to "homeschool," in order to avoid detection. In a 2014 study by Knox and her colleagues, out of 38 cases of severe child abuse, nearly 50 percent of parents had either removed their kids from public school or never enrolled them — officially informing their states that the children were being homeschooled. “This is a pattern all of us see over and over and over again,” Knox said. “Certainly there are wonderful home-schooling families. But the lack of regulation for this population makes it easier to disenroll children from public school to further isolate them and escalate abuse to the point of reaching torture.”

Several neighbors who have been interviewed by news outlets following the shocking discovery of alleged mistreatment have said that something did seem "off" about the Turpin family. “I thought the kids were home-schooled,” said Kimberly Milligan, a neighbor who lives across the street from the Turpin home, according to The Los Angeles Times. Milligan said many details seemed out of the ordinary — how pale the children were, how they never came outside to play, etc. According to the publication, she went on to say:

You know something is off, but you don’t want to think bad of people. We’re not acres apart. How did no one see anything?

This story of reportedly horrific abuse does raise questions about regulations for homeschooling, as well as "schools" that come into existence the same way the Sandcastle Day School may have. It also brings to light the importance of regular citizens intervening when they suspect something isn't as it's supposed to be. It's no ones fault, but if the Turpins' neighbors noticed odd behaviors that didn't quite add up to a healthy, normal home environment, it may have been a good idea to call the police, even if they did it anonymously. There are so many questions that remain unanswered in this terrible case, but I can only hope the children are able to heal and can go on to lead meaningful lives — and that we as a society consider some serious homeschooling regulations that hold families accountable. So something as unimaginable as this never happens again.