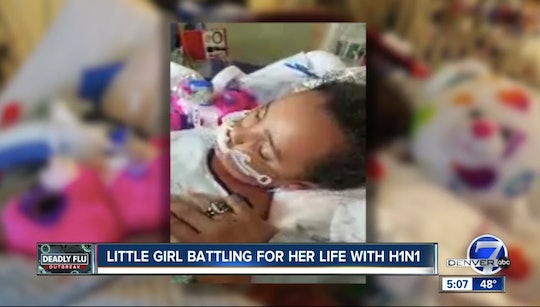 By now, you've likely heard that this year's flu season is turning out to be much more dangerous than other years. If health experts and news articles haven't convinced you to go take you and your family to get a flu shot, these parents are warning others about the dangers of the flu, too, after their daughter's lung collapsed due to complications from the virus.

Keyona Richardson, a 10-year-old girl from Colorado, has been in the pediatric ICU at Children's Hospital Colorado after coming down with the flu, her mother, Kristie Richardson, told local Fox News affiliate WQAD 8. Richardson told the outlet that it all happened very fast, explaining that her daughter's school asked her pick Keyona up because she had a high fever. They went to an emergency room and she was diagnosed with pneumonia, according to WQAD 8. After she took her daughter home, as Richardson told WQAD 8, she later became worried about her daughter's breathing and they took her back to the hospital.

Keyona was admitted that night and her left lung had collapsed in the morning, as her mother told WQAD 8. Corey Richardson, the young girl's dad, told the outlet that the nurse told him "your daughter is as sick as she could possibly be without passing away at this very moment, but we’re going to do all we can to fix it."

Doctors put the young girl on a machine that acts like an artificial lung and she's now doing much better, her parents told the news outlet. But the Richardson family wants other parents to know to take flu symptoms seriously, since things can move fast. According to ABC News affiliate Denver 7, Keyona was diagnosed with H1N1, more commonly known as the Swine Flu, and needed "assistance breathing as the H1N1 virus had taken over her body."

"Had we waited we wouldn't have my daughter. I never knew the flu could do this," Keyona's mom said in the same interview. Dr. Suchitra Rao at Children’s Hospital Colorado agreed with the Richardson's warnings, explaining to local Fox News affiliate KDVR:

Flu is severe. There’s a lot more hospitalizations now than we have seen in the past. For example in Colorado hospitalizations are up 227 percent. So just in our hospital alone we’ve seen over 300 children admitted for flu.

It's not just in Colorado — in Alabama schools are closing because of a flu epidemic and across the country, hospitalizations are up, according to ABC News. This is in large part because of the makeup of this year's flu virus. According to the Centers for Disease Control and Prevention, every flu virus is made up of five strains: influenza A, H3N2 and H1N1, two different strains of influenza B, and influenza C.

Although Keyona was reportedly diagnosed with H1N1, this year the flu virus has a dominant H3N2 strain, which has a reputation for having worse symptoms. And it's also less common, so our bodies have a more difficult time fighting it, which makes the symptoms worse, as reported in The Washington Post.

This year's vaccine also mutated, according to National Geographic, so it's not as effective as it could be against the H3N2 strain. But that doesn't mean you shouldn't get one. The Food and Drug Administration recommends getting a flu shot anyway, even this late in the season, since it can make you partially immune and make the symptoms less intense. Essentially, some protection is better than none.

Seriously, anything you can do to protect yourself and your family is worth it, since complications can from the flu can be fatal, according to the CDC. The flu shot is effective and safe, even for pregnant women. The CDC explains:

The flu vaccine cannot cause flu. The vaccines either contain inactivated virus, meaning the viruses are no longer infectious, or a particle designed to look like a flu virus to your immune system. While the nasal spray flu vaccine does contain a live virus, the viruses are changed so that they cannot give you the flu.

In addition to getting a flu shot, you should take flu symptoms and prevention seriously. Be vigilant about washing your hands and your kids' hands and change out toothbrushes and sponges if someone in your house is sick. Also, take symptoms seriously, just like the Richardsons recommended. It's not always easy to take a sick day or have a kid home from school without child care at the ready, but taking care of yourself is the best way to not spread the virus.