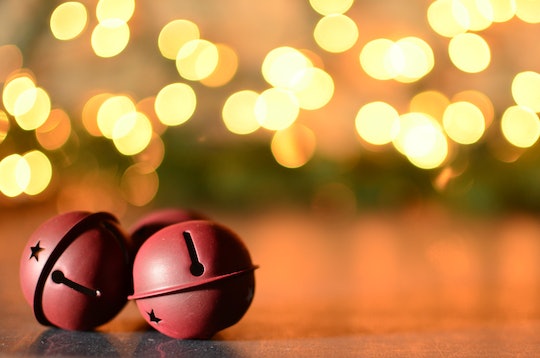 On a normal day, being the parent of a toddler means living in a state of constant vigilance. It seems like you’re always on the lookout for sharp edges, tiny objects, and basically anything that can (or could) pose a danger to your little one. But being the parent of a toddler during the holidays is... well, it’s keeping your eyes peeled for all of those everyday dangers. But this time they’re covered with glitter, beautifully lit, and hanging on a huge tree in your living room. And unfortunately, it’s impossible for even the sharpest adult eyes to spot all the ways that a toddler can get themselves into trouble. That’s what one Missouri family found out after their baby nearly lost her finger in a jingle bell ornament, such an innocent decoration that most parents wouldn’t think twice about, according to local NBC News affiliate WCMH.

Sean and Lisa Jackson told the local news station that of their four daughters, their youngest, 14-month-old Andi Jackson, is by far the most adventurous. So, when they discovered that the toddler had grabbed a small Christmas decoration — a jingle bell — and had somehow gotten it stuck on the end of her index finger, they weren’t exactly surprised, WCMH reported.

Lisa Jackson told the outlet that, at first, she and her husband just laughed it off, but then they noticed that the bell really wouldn’t move. Even after rubbing baby oil on the little girl’s finger, the parents couldn’t get the ornament to slide off, according to WCMH. And when they noticed their daughter’s finger had begun to bleed, they really began to get concerned (understandably!).

But when the Jacksons drove the baby to the emergency room, the news was far from what they expected. Lisa Jackson told WCMH that the local ER said they couldn’t treat Andi. “She said 'I'm not touching this. I haven't seen anything like this,'" Jackson said, according to the video clip of her interview.

No parent wants to hear those words. I’m freaking out just typing them. (And also making a mental note to remove all bells from our family’s Christmas tree — ASAP.) But things got even worse once the family was finally seen at St. Louis Children’s Hospital, according to WCMH. Jackson said the doctors there told her there was a good chance her infant daughter — who was screaming in pain, at that point — would lose her finger altogether.

"We can't say her finger will be saved. We can't guarantee it. This is serious at this point it was on five hours," Jackson recalled the doctors telling her, according to her interview with WCMH.

According to local NBC News affiliate KMOV, the doctors were ultimately able to remove the girl's finger from the bell by using device her parents described as "high-tech needle nose pliers." Little Andi will reportedly need follow-up care and left the hospital with her arms "bandaged up," KMOV reported.

The latest available data from the Consumer Product Safety Commission shows just how accident-prone people are at this time of year: between November and December 2010, some 13,000 people were seen in emergency rooms because of injuries related to holiday decorating, CNN reported. According to the outlet, though most injuries are in adults who fall while putting up lights and other decorations, lights, candles, and inappropriate toys pose a unique risk for kids during the holidays.

Dr. Kristin Harkin of the American College of Emergency Physicians told CNN that while “you can't be safe 100% the time,” there are a few ways parents can ramp up their baby-proofing to keep little ones safe (or safer) at this time of year. Choosing age-appropriate toys, checking for small batteries or other choking hazards, and even looking out for hidden dangers posed by things like deflated balloons and broken ornaments can all help keep toddlers out of danger, she explained to CNN.

As what happened to the Jackson family proves, the holidays can be extremely unpredictable with a toddler in the house. It’s impossible to foresee all the dangers that holiday treats and trinkets might pose. So, the best thing that parents can do is to keep eyes open as best they can. Or you can do what I plan to do today: strip the Christmas tree and buy an extra set of needle nose pliers.