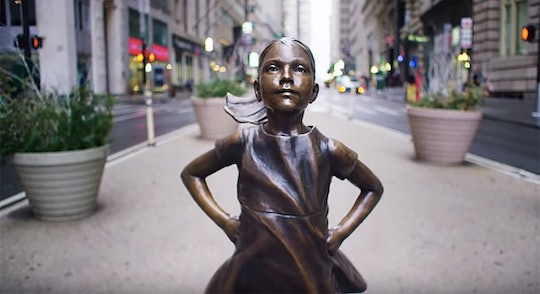 New Yorkers and visitors from across the United States are likely familiar with "Fearless Girl," a statue located in Manhattan's Financial District. The statue — unveiled in honor of International Women's Day in 2017 — shows a young girl defiantly staring at Wall Street's Charging Bull sculpture. Artist Kristen Visbal created the iconic statue to "advocate gender diversity on corporate boards," according to Atlas Obscura. But on Friday, parents of a Parkland shooting victim put a bulletproof vest on Fearless Girl, an act designed to generate conversations about gun violence in America.

Fearless Girl, a 50-inch statue, resonates with people because of its important yet simple message about women's equality in the workplace. “This is a piece of work all women of any age, shape, color or creed can relate to,” Visbal said in a statement to The New York Times about the piece in 2017. “A work which reminds us today’s working woman is here to stay and has taken her place in the nation’s financial district.”

“What this girl represents is the present, but also the future,” chief of marketing at State Street Global Advisors added, as The New York Times reported. “She’s not angry at the bull — she’s confident, she knows what she’s capable of, and she’s wanting the bull to take note.”

Of course, it's not uncommon for pieces of art to be reinterpreted or reimagined to convey a timely message. And that's why two parents transformed Fearless Girl into Fearful Girl, complete with a bulletproof vest.

"She can’t be fearless if she’s afraid to go to school. #fearfulgirl," the org's Twitter account wrote.

As for how the design concept came into existence, Change the Ref partnered with Fight Gunfire With Fire, an initiative that takes "big, thought-provoking creative ideas" about gun violence and makes them "real," according to the organization's website.

Any advertising students can submit ideas to the group, something University of Alabama students and MullenLowe interns MK Holladay, Emeline Earman and Mingyu Jo did when they created #FearfulGirl, according to Adweek.

Although the ladies initially wanted to put the vest on the Statue of Liberty, they landed on Fearless Girl for logistical reasons and because the statue is “incredibly loved and admired.”

“As soon as we saw it, we knew we had something powerful,” Fight Gunfire With Fire co-chairman Mark Wenneker explained to Adweek. "If they saw it another way for a moment or an hour, it would strike a chord and make people stop being numb for one moment and shake them into action.”

The transformation of Fearless Girl into Fearful Girl is much more than a creative art piece — it's symbolic of the countless children who are at risk to experience gun violence each and every day. Although the message of Fearless Girl is important in itself, this reimagined version of the statue is especially timely. Because no "Fearless Girl" can exist in a country where 154 mass shootings occurred in 2017 alone, according to Fortune, and when gun violence is increasing in America, according to TIME.

Hopefully, #FearfulGirl sparked some necessary conversations about gun violence and safety because it's never too late to find solutions to this ongoing problem.