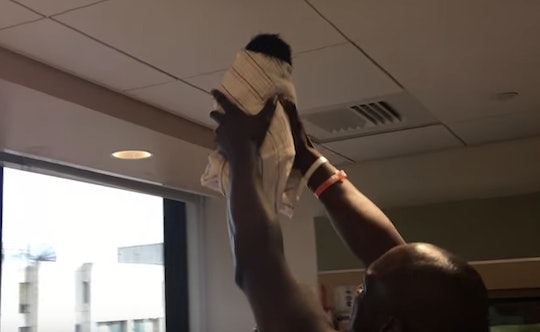 Be prepared. These parents recreated The Lion King's famous opening scene with their newborn daughter, Kaiori, in a hospital the day after she was born, and I can't promise it won't evoke a few tears. OK, perhaps I'm more on the sensitive side, but I can almost guarantee a smile. New mom and dad, Maria, 33, and Timi Wusu, 32, both resident physicians in the Boston area, recently published a video on YouTube of their rendition of The Lion King's opening scene, where Rafiki memorably lifts Simba in the air on top of "Pride Rock" as part of a ritual commemorating his birth.

And the Wusus perfectly captured the excitement and feels of the Disney movie's scene with "Circle of Life" playing in the background. Kaiori was born on April 27, and the magical video happened the day after. Apparently, many others found the Wusu's rendition adorable. The video was published on YouTube two weeks ago and has been viewed more than 73,000 times so far.

"I'm excited that the video has brought so many smiles to so many people," Timi said in an interview with ABC News. "Finally our wonderful, healthy, child was born, and I had been itching to show her off. 'The Lion King' theme had been in my mind for months, and I just knew that Kaiori needed to be introduced with similar grandeur and hilarity."

As the Lion King-like ritual came to a close, Kaiori was welcomed to a room full of cheers, dancing and a lot of excitement. Timi told ABC News that the video was "a hit" among his family and friends. How could it not be? Every second of it was adorably memorable.

In the beginning of the video, Timi imitated Rafiki rubbing (what appeared to be) liquid from a fruit, on Simba's head in the movie. Timi cleverly rubbed an oil or cream across Kaiori's forehead. (And kudos to the pretty impressive editing and sound effects attached to Timi opening the jar).

There she is. Kaiori's first step to her formal introduction to "The Pride Lands" – or, the hospital staff in this case – but adorable nonetheless.

As Timi made his way to the other side of the room to lift and "introduce" his daughter, I couldn't stop thinking how awesome their commitment to this is. Well done, mom and dad.

World, welcome Kaiori, and Kaiori, welcome to the world. But really, what a better way to start your life than in a room filled with excitement, joy, and parents who clearly love you and think life is about having a little fun. In case you need more adorable-ness in your life, the Wusus have previously uploaded other YouTube videos, with singing duets and impressive dance moves.