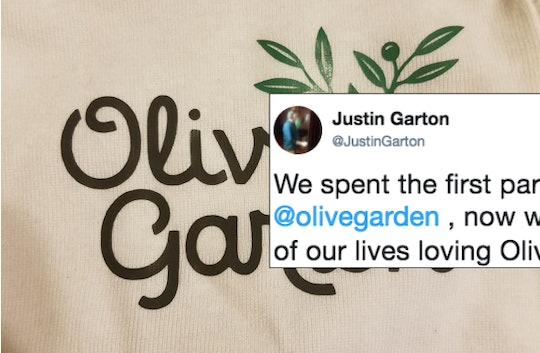 These Parents Will Name Their First Baby After Olive Garden & Mamma Mia, It's A Cute Story

Listen, if there's anyone out there who understands the love one can harbor for a place that routinely has some sort of never-ending pasta special going on, it's me. But now, someone has taken that love to a whole new level. Yeah, these parents are naming their first baby after Olive Garden and it's actually kind of hilarious. OK, OK, so the couple isn't naming their child Olive Garden literally, but they are going with a name that's pretty clearly inspired by the popular Italian chain restaurant.

Justin Garton, who is expecting his first child with wife Jordan, recently tweeted out what the couple had decided to name their daughter, due in December. "We spent the first part of our lives loving @olivegarden," Justin wrote, "now we get to spend the rest of our lives loving Olivia Garton." Justin included an adorable little custom onesie in the tweet as well, with "Olivia Garton" written in the signature Olive Garden font, front and center.

The couple's love story with the restaurant is certainly adorable, but it's also worth noting that the official Olive Garden account has taken notice of Garton's tweet and offered to give the couple some sort of free gift.

Speaking to Food & Wine, Justin revealed that his wife, Jordan, "is a third generation Italian-American," so the couple wanted to choose their daughter's name carefully, and honor that Italian heritage with the name they chose. So, they decided on Olivia, since it was both beautiful and had Italian roots. But then, the couple realized that with their last name, their daughter's full name would bear a striking resemblance to one of their favorite date night destinations. And along with this discovery was the realization that Olivia Garton was, in fact, the perfect name for their daughter. The mom-to-be told Food & Wine:

When we first said it out loud together, it was so beautiful, and we both knew at that moment that was the right name for her. We didn't directly name her after Olive Garden, but I can say there was an intentional connection.

This "connection" that Jordan talked about is actually pretty darn special. According to the couple's interview with Food & Wine, Olive Garden became their go-to place when they purchased the restaurant's Never Ending Pasta Passes. "At the time, we could barely afford groceries, so that initial investment in the pass helped us get by," Jordan told the publication. "Since we were there every day, we became friends with the staff and that made that period of time for us very memorable."

However, the soon-to-be new parents were also very aware of how other children might react to a child being directly named after an Italian chain restaurant, so they decided something a little more subtle would be best. Jordan told Food & Wine:

As we went through a few more names, we considered "Olive." We both got a kick out of the pun "Olive Garton," given our history with the restaurant, but we wanted it to be a bit more subtle. Kids can be cruel, if you know what I mean, and Olivia rolled off the tongue a bit better with her middle name: Michelle.

Olivia isn't due for a few more weeks, but Jordan made it perfectly clear that she's probably going to be pretty used to being in her namesake restaurant, as soon as possible. "Baby Olivia's due date is December 6, so more than likely mommy will be needing some Olive Garden in her tummy shortly afterwards," she told Food & Wine. "Olivia will probably be at the restaurant several times before she is even eating solid foods."

Right on, Jordan. Everyone loves pasta, and just about everyone loves Olive Garden. So, I'm guessing little Olivia Garton will be pretty popular there, too.