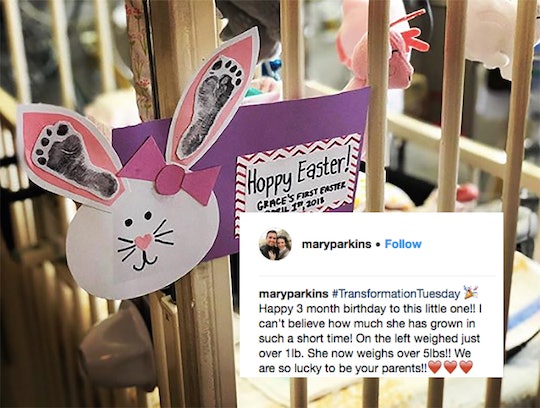 When you're the parent to a baby who was born prematurely, every milestone — no matter how small — is a cause for celebration. And thanks to social media, parents of premature babies are now able to relish in these special moments with other people who might be going through a similar situation. As for the latest story that's moving parents, look no further than these photos of a premature baby's transformation. Not only is the post inspiring countless people, but it also reinforces the importance of online communities. Warning: This article contains images that might be triggering or graphic to some readers.

In October 2017, a parent named Mary Parkinson took to Instagram to announce her pregnancy to friends and family. "We have some news...(We have a bun(d) in the oven)," Parkinson captioned a snap of herself posing alongside her husband, according to Instagram. "#pregnancyannouncement #pregnant #april2018 #morning sickness #baby #love #like #cute #yay #thebund #rainbowbaby #hopeafterloss."

Based on the post's hashtags, one can assume this pregnancy followed the loss of another baby — a heartbreak Parkinson confirmed in a May 2017 post. But, as Parkinson pointed out in her pregnancy announcement, she was feeling a sense of "hope" with this new pregnancy. And it's likely Parkinson relied on this hope when she gave birth to her daughter, Grace, in January — four months before her April due date, at just 23 weeks. "This beautiful little girl joined the world on New Years Eve and has been fight the odds ever since," Parkinson captioned a shot of a tiny Grace, according to Instagram. "I’ll be trying to post updates about our little Grace as often as possible. But she is a fighter and we are so proud to be her parents!"

Following Grace's birth announcement, Parkinson continued to keep her loved ones and supporters updated on Instagram. From a video of Grace smiling for the first time (even thinking about the vid makes me teary-eyed) to a snap of the baby "celebrating" Easter, her journey is truly moving.

And on Tuesday, Parkinson decided to celebrate Grace's progress with a side-by-side snap of her "transformation," a post that many parents out there are finding inspiring. "#TransformationTuesday Happy 3 month birthday to this little one," Parkinson captioned the pics, according to Instagram. "I can’t believe how much she has grown in such a short time! On the left weighed just over 1lb. She now weighs over 5lbs!! We are so lucky to be your parents!!

Shortly after Parkinson shared the update, many parents, including those who can relate to her story, took to the post's comments section to send her messages of support. Needless to say, most of the commenters were blown away by Grace's will to fight.

"Amazing!! The fight is real!! My 3 year old son was born at 25 weeks and had to fight to make it," one person said. "He’s now healthy and the happiest kid alive so we’re grateful every day. Stay strong, stay positive and make sure to look after yourself. She’s gorgeous!"

"Your daughter is honestly a little big fighter! I read every update and I got so emotional," another supporter chimed in. "She is such a cute baby! Just the best for you and your family.

I came upon your story on a news website and I wanted to follow you to see some more of beautiful Grace and her story! I am so in awe of your little family and the unbelievable strength that you have all shown! I’m currently 29wks pregnant and sending you all the love and luck for the future. You have such amazing positivity and are wonderful parents already, what a lucky little girl Grace is. Wishing you nothing but the best!

Of course, the journey of a premature parent has its highs and lows — and it's often unpredictable. Case in point: On Thursday, Parkinson revealed that Grace was diagnosed with stage 3 Retinopathy of Prematurity, a "potentially blinding eye disorder that primarily affects premature infants," according to the National Eye Institute. Although Parkinson admitted that this "setback" is "heartbreaking" (Grace will have to undergo laser eye surgery), she remains hopeful about her future. "Hopefully the surgery will go well and she will be back to her normal self soon," Parkinson wrote, according to Instagram.

The good news is Parkinson will have the encouragement of her newfound supporters to help her through this next obstacle, and it's a testament to how powerful social media can be for parents.