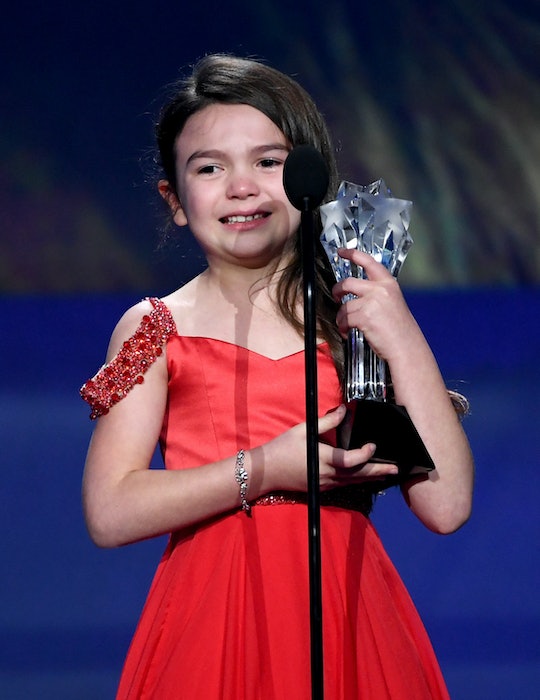 While the Golden Globes may be over and done (and Stranger Things fans rightfully outraged), January's next award show was Thursday night — and there was one winner that absolutely no one could protest. Aside from her amazing work in The Florida Project, these photo taken just as Brooklynn Prince won Best Actress at the Critic' Choice Awards, alongside her family, will make you so proud and so, so happy for the young star.

Prince, who's just 7 years old, captivated viewers with her portrayal of Moonee in the film, which has earned rave reviews from critics everywhere — and for good reason. The New York Times referred to Prince as The Florida Project's "precocious, mouthy, utterly convincing young star," and the movie has a 96 percent rating on Rotten Tomatoes. It wasn't the blockbuster smash hit that Girls Trip or Wonder Woman was in 2017, but it certainly got people talking.

The movie follows Prince's character as she navigates life with a smile, despite some harsh circumstances. And now, just as 2018 is starting to become a seriously newsworthy year, The Florida Project is winning some major awards, and its young star is certainly on the path to A-list status.

And after winning the award for Best Young Actress on Thursday night, Prince gave a totally heartwarming and adorable speech that was followed by plenty of applause and much-deserved embraces — obviously from her proud parents.

Now, in case you haven't gotten a chance to see the indie film, allow me to fill you in on what the award-winning movie is all about. Basically, it's Wes Anderson's Moonrise Kingdom, but grittier. According to the movie's entertainment company, A24, the movie focuses on Prince's character and her bright personality shinning a light in the dark world. According to A24:

Set on a stretch of highway just outside the imagined utopia of Disney World, The Florida Project follows six-year-old Moonee (Brooklynn Prince in a stunning breakout turn) and her rebellious mother Halley (Bria Vinaite, another major discovery) over the course of a single summer. The two live week to week at “The Magic Castle,” a budget motel managed by Bobby (a career-best Willem Dafoe), whose stern exterior hides a deep reservoir of kindness and compassion.

So obviously, Prince's win is definitely well-deserved. Her role was serious, and she nailed it.

And in case Prince's role in The Florida Project wasn't enough to win you over, perhaps her acceptance speech will do the trick. According to People, Prince started her acceptance speech at Thursday night's award show by saying, "Wow, this is such an honor but I would like… all the nominees are great — we should go and get ice cream afterward." Yes, seriously. She really is adorable.

That's right, even though she is only a 7-year-old, Prince totally understands gratitude, and what it means to be thankful. But, you know, if you still aren't completely in love with Prince after her speech and the heartwarming photos of her accepting her award, I've got a little secret for you.

Prince also told People back in November that Stranger Things' Millie Bobby Brown was her "best friend" as well as her "favorite Facetime person." Yep. Prince's favorite person is the world's favorite person. Honestly, could Brooklynn Prince do any wrong? It's seriously doubtful.