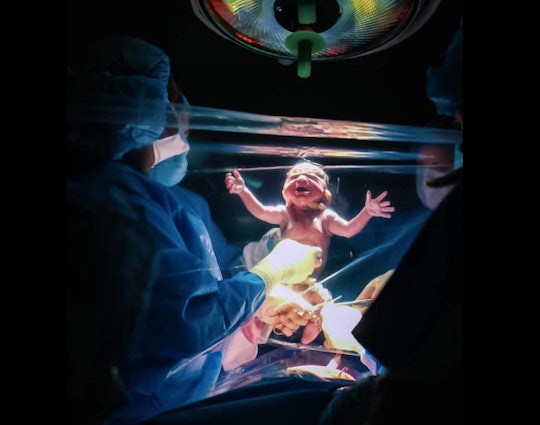 Thirty percent of births in the United States are C-sections, according to Today. Although a lot of parents deliver their babies via C-sections, the process still has a lot of room for improvement, especially when it concerns the blue drape that covers the bottom-half of the parent during delivery. Unfortunately, many parents don't get the chance to actually see their baby being delivered thanks to these bulky drapes, and some parents are calling for clear drapes to be an option in all delivery rooms. If you're one of these parents, you'll love these gorgeous photos of clear C-sections with plastic drapes.

To be honest, I never considered C-section drapes before. It's just not something that's discussed very often, and I had no idea that clear drapes are becoming more popular among parents who deliver via C-section. But it's obvious why all parents deserve to see their child born, and clear drapes allow parents an unobstructed view similar to that of parents who deliver vaginally. Most importantly, it allows parents to take a more active role in the birth of their child. And on a purely aesthetic level, clear drape C-sections are pretty beautiful.

Alyssa Leon, a doula and photographer, regularly shares stunning photos of "clear drape C-sections" to her Facebook business page, Cherry Blossom Doula Services. Leon, who started Cherry Blossom Doula Services in 2013, believes that clear drape C-sections can be a wonderful alternative for parents who didn't plan on having a C-section in the first place, and she also thinks that clear drapes can create a more "gentle" birthing environment. Leon's photographs are as breathtaking as they are informative.

Leon captioned one of the photos, according to Facebook:

How do you know what options you have if you don’t ask? This sweet family had a gentle cesarean environment with a clear drape and skin to skin with momma and baby.

Leon brings up an important point here, which is that families should advocate for their birthing needs. Many parents are granted clear drape c-sections after they make their wishes known to the appropriate medical professionals, which was the case for Tabitha Dawes. Dawes, who gave birth to her fourth child at North Carolina Women's Hospital, had a clear drape C-section after she had an open discussion with her delivery team, according to UNC Department of Obstetrics & Gynecology. Dawes said of the experience, according to UNC Department of Obstetrics & Gynecology:

I learned that at UNC, how you give birth — even when you need a cesarean section — can be an open conversation. As a mother, that changed how I viewed the experience. It becomes something you are part of and that you choose, rather than something that's done to you.

Dawes experience goes to show that parents can ask for what they want in the delivery room. There's no harm in trying, right?

And if you're worried about seeing the surgery part of the C-section, don't stress out. Molly Harvey, manager of women's and children's services at Crestwood Medical Center in Huntsville, Alabama, explained, according to AL:

It's not as scary as it sounds. The mom can't really see up into the abdomen. We ask dads to stay seated by the mom's head. She still has a belly so she's not going to be able to really watch her c-section. You can just see anything that is lifted, which is the baby.

Of course, clear drapes aren't for every parent. Leon's photos are simply meant to show parents that they have options in the delivery room. Those options might look a lot different than parents imagined, but they can still be beautiful.