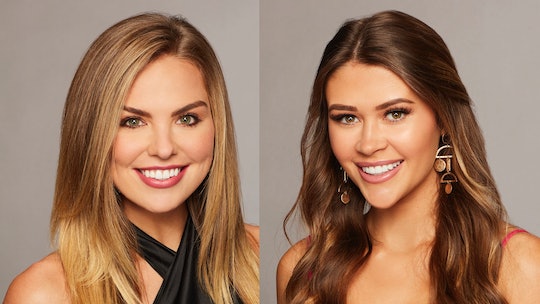 Hannah B. & Caelynn Were Friends Before 'The Bachelor' & There Are Pics

Put a bunch of people in a house, competing for love from the same man, and you've got a recipe for drama. But make sure two of those competitors already had a feud going on before production, and you've got a recipe for an A+ season of The Bachelor. And this season, former pageant queens Hannah B. and Caelynn are causing most of said drama. But interestingly, there are plenty of photos of The Bachelor's Hannah B. and Caelynn that prove they were friends before their reality TV careers.

For a little background on the feud between Hannah B. and Caelynn this season, you need to go back to Episode 1. Once both women had stepped out of the limo, greeted Colton, and sat down to get to know the other contestants, someone immediately called out the fact that both women were pageant queens. Caelynn and Hannah revealed to the other girls that yes, they did know each other, and there was a palpable tension in the air in that moment. And as the season has gone on, they revealed that they were actually more friends than they were enemies during pageant season.

“We were really close, and then I noticed when I was getting more attention in terms of Miss USA stuff is when she started to get into her head,” Caelynn told Bachelor Colton Underwood on the show, as per PureWow.

As the story goes, Caelynn (Miss North Carolina) placed as the first runner-up at the Miss USA pageant and Hannah B. (Miss Alabama) did not place. In a recent episode, Caelynn elaborated on their relationship as roommates — yes, roommates — and how Hannah changed when she was eliminated. As per Variety, Caelynn said:

We’re not necessarily the best of friends. We were roommates at Miss USA. We were super close, and then she wasn’t happy that I was first runner-up. She was mad that she didn’t place, for sure. There were a lot of hurt feelings ... With Hannah, there’s a façade and then it starts to crumble. Hannah kind of snapped; she flipped a switch. I was like, Wow, this is a whole new Hannah. Being in this environment, it’s pretty similar. I have no doubt that switch will be flipped soon. It happened pretty quickly.

Hannah has also made it clear that she's not over the past. “It’s just so funny because there’s not one person in the world that I have a problem with, except her," she said on the show.

Anyway, there are a slew of photos of the two women together from their pageant days — many of which are on Caelynn and Hannah's Instagrams. In some, they're goofing around in their sashes. "Gosh I love them," Caelynn captioned a shot of herself, Hannah, and another contestant.

There are also plenty of photos on Instagram of Caelynn and Hannah making official appearances at the pageant together.

There are also photos of them posing for pageant photoshoots together.

The two have also hung out during their time off from the pageant. Take a look at that brunch pic:

Even though the drama between Caelynn and Hannah is certainly entertaining, it would also be great to watch them resolve things on The Bachelor this season. But if Caelynn gets closer to marrying Colton than Hannah does, well, I wouldn't count on them putting their grudge aside.