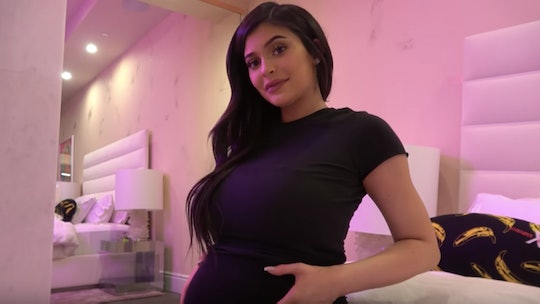 These Photos Of Kylie Jenner As A Baby Vs. Stormi Prove They're Totally Twinning

Kylie Jenner has been notoriously private about pregnancy and motherhood. Though the reality star and makeup mogul only gave birth two months ago, she kept all of it a secret until after her daughter arrived. Now, she allows fans a look into her life with Stormi Webster every now and again, and has even answered questions from fans on Twitter about little Stormi, at one point mentioning that she looks "just like she did" as a baby. And she's right: these photos of Kylie Jenner as a baby vs. Stormi now prove that they are totally twinning in more ways than one.

After months of keeping fans out of the loop, Kylie took to Twitter and Instagram to post an explanation for her absence followed by a video documenting the nine months of her pregnancy. "I’m sorry for keeping you in the dark through all the assumptions. I understand you’re used to me bringing you along on all my journeys. My pregnancy was one I chose not to do in front of the world,” she wrote. “I knew for myself i needed to prepare for this role of a lifetime in the most positive, stress free, and healthy way I knew how."

Now that Stormi is here and healthy, Kylie has begun sharing personal photos of her, and it's clear that she really is her mom's mini-me. And here's proof.

At the beginning of Kylie's now famous pregnancy and birth announcement video, "To Our Daughter," she opens with a clip of her mom Kris Jenner giving birth to her.

Fans will recall that it was actually Kris who first really teased the fact that Kylie (and Khloé, which was confirmed in December) were both pregnant, as E! News reported. She teared up in a Keeping Up With the Kardashians teaser, according to E! News, and said:

The video comes full-circle and concludes with a similar shot of Kylie holding Stormi for the first time. The editing even makes the quality seem similar to what it was in the 90s.

“Pregnancy has been the most beautiful, empowering, and life changing experience I’ve had in my entire life and I’m actually going to miss it,” Kylie said in her announcement, according to Us Weekly. “I appreciate my friends and especially my family for helping me make this special moment as private as we could.”

When Caitlyn & Kris Jenner Introduced Kylie To The World

Holding her hand the same way Kylie held her own daughter's 20 years later, at the end of Kylie's "To Our Daughter" video, you can see Caitlyn Jenner holding Kylie's hand and introducing her to the video. It all comes full circle.

When Kylie Introduced Stormi To The World

In the very first Instagram photo ever posted of Stormi, Kylie shared a photo of herself holding her daughter's hand, immediately following the announcement that she had been pregnant all along. For those paying close attention, the photo of choice could have been a homage to one of her own home videos, when Caitlyn and Kris met Kylie for the first time.

Kylie As A Baby

Caitlyn Jenner took to Instagram to share her well-wishes after Kylie gave birth. "My daughter just had a daughter," she wrote on the throwback photo, before sharing her pride and love for both of them. She continued:

My daughter just had a daughter. It’s amazing to be by your side through this journey. She’s SO beautiful already. Can’t wait to watch her grow. Throwback to my baby, as a baby @kyliejenner.

Stormi As A Baby

Kylie has been carefully sharing photos of Stormi on different social media platforms. Mostly, she's shared clips of her on Snapchat or Instagram Stories, according to E! News, like when she shared this sweet shot of her with her BFF Jordyn Woods.

And when she shared this adorable photo of Stormi a walk with Kylie and her dad, Travis Scott.

Or when Kylie shared this super beautiful shot of Stormi sleeping in a pink sweater, In Style reported.

Only time will tell what her little girl will look like in the future, but these throwback photos of Kylie could give fans a pretty good idea of just how adorable she'll keep on being.

What's amazing to remember is that it's just the beginning of seeing Kylie's life as a mom, and it's pretty clear that there will be tons more #twinning pics to come.