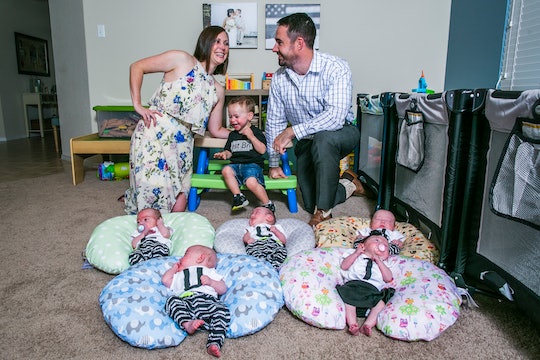 I'm sure you've seen pictures of babies before, and perhaps you're so over all those reality shows about families with multiples, but you're probably going to rethink that once you see these photos of the Hodges' "Half Dozen", because they're going to send you into a coma of cuteness, and unfortunately, there's no cure. Hodges Half Dozen, which premieres Nov. 7 on TLC, features Liz and Daniel Hodges, 2-year-old Rowan, and quintuplets Teagan, Connell, Liam, Nolan, and Dillon, and boy, are these kids adorable. I mean, as long as you're not the one who has to empty that Diaper Genie three times a day.

Rowan was conceived with the help of fertility drugs, and when the couple used the same treatment to try for a second child, they were surprised by a third, fourth, fifth, and sixth, as well, according to TLC. Liz is a nurse, and Daniel, a former Marine, is currently enrolled in medical school, so time, money, and energy are all already at a premium in that household. Adding five babies to the mix is obviously going to be a huge challenge, but I mean, come on, look at those little nuggets! Totally worth it. Especially for viewers, because we can just turn them off if they cry.

The Hodges quintuplets were born on March 24, at just 26 weeks gestation. They all stayed in the neonatal intensive care unit for about four months before coming home due to complications from being born 3 months early. In a clip of the upcoming series, a doctor describes the babies condition as "life-threatening prematurity." Dillon was having trouble breathing at birth, and spent the longest time in the hospital before finally coming home in late July.

Now that they're all home, things will no doubt be much easier for Liz and Daniel, whose home in Temple, Texas, is an hour-and-a-half drive from the hospital where the babies spent the first four months of their lives. "Being able to get pregnant with one child is a huge blessing," Liz says in the video. "Anybody who's gone through infertility treatments can speak true to that. Getting pregnant with quintuplets was an even bigger miracle. What I said first was, 'I don’t know whether to laugh or cry!'" Why not both? I feel like I'd probably do both.

Daniel also assured viewers, "We’re not planning on having any more children after the six total." Unless TLC can hook them up with a bigger house, I don't see how they could. But when they make such excellent babies, it almost seems a shame not to try for a full dozen, no?

OK, that may be a bit much, since they're literally so outnumbered, they don't even meet day care staffing minimums. But if they needed someone to hold one of those little cuties, I'm sure there's an army of people ready to lend an arm. Just look at tiny Teagan surrounded by her brothers! Only 6 months old, and even she seems overwhelmed by the amount of babies in that house.

If I'm being honest, the logistics of actually bathing five infants (and a toddler) are probably a complete nightmare, but look how freakin' cute they are when they're all fresh and clean! Can't you practically smell them? Almost makes you want to try for a litter of your own, right? No? Yeah, me neither.

And best of all, it looks like Rowan's putting the terrible twos on hold and helping his mom and dad take care of his little sister and brothers. Check out the caption of this adorable collage:

I have to brag on big brother Rowan for a second.. it is so amazing to see this little boy's love for these babies! He gives them their paci when they cry, covers them with blankets, plays with them on the play mat, and wipes up their spit up!!! God knew what he was doing when he made this kiddo a big brother to quints, which is not easy!

He. Wipes. Up. Their. Spit-up! Can you imagine? Let's hope he doesn't get tired of caring for those babies, because the whole family is in for a lot more work in the years ahead.