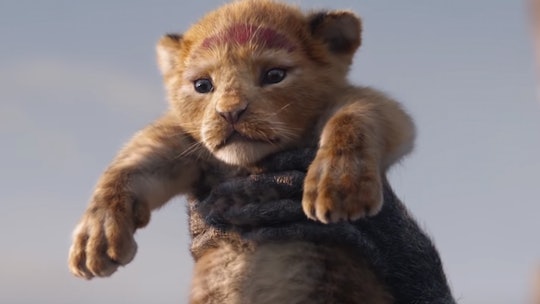 These Photos Of 'The Lion King' Cast & Their Characters Will Make You Say "OK, Wow"

We have mere weeks to wait before the newest iteration of The Lion King hits theaters on July 19. The film will be retelling the classic story we know and love, but with an entirely new take on each of the roles. Helping us to visualize the people behind the voices, Disney unveiled photos of the Lion King cast with their characters and, TBH, they will make you even more excited for the movie's debut than you already were.

More Like This
Kevin Hart Plays A Widowed New Dad In Netflix’s Fatherhood
Stop What You're Doing & Show Your Kids The 'PAW Patrol' Movie Trailer Right Now
Have Disney+? You Can Stream 'Raya & The Last Dragon' For Free Tomorrow!
Please Enjoy The Sandlot's Patrick Renna Slapping A Raw Steak On His 4-Year-Old Son's Black Eye

The film's lead characters shared some of the uncanny, powerful, and sometimes pretty funny pictures to their Instagram accounts today. According to Collider, the new cast includes Donald Glover as Simba, Seth Rogen and Billy Eichner as the impeccably cast Pumbaa and Timon, respectively, John Oliver as Zazu, Chiwetel Ejiofor as the villainous Scar, Alfre Woodard as Simba’s mother Sarabi, John Kani as Rafiki, James Earl Jones reprising his role as Mufasa, and, of course, Beyonce Knowles Carter as Nala.

The images feature each of the main cast members in front of a black screen, looking eye-to-eye at their animated characters. In some cases, it's pretty moving to see a celeb you know and love gazing at the animal-version of themselves, while in other cases it's uncanny to see how much the actor looks like the character, and at some points, it's just downright funny how similar they are in appearance.

... And The One And Only Beyoncé As Nala

... And Alfre Woodard As Sarabi

And, Of Course, Shahadi Wright Joseph As Young Nala And JD McCrary As Young Simba...

When it comes to reimagining such a classic and beloved movie, of course there always comes the question of whether or not it will be take-for-take the same as the original animation, or if the story will differ slightly. In an interview with Gizmodo, director Jon Favreau shed light on just this, and shared that they kept what was so special about the film, and then improved what they thought they could.

“We’re staying very, very close to what you think it’s gonna be,” he told Gizmodo. “I think part of it is just understanding the way memory works. What expectations are and then being able to do things like, ‘I think we can [improve]the humor here, I don’t think this joke holds up as well, I think we could change the characterization of this character to feel more consistent with the rest of the film, or more current [so it] doesn’t feel like it’s something from a different era.’”

Despite the fact that the film is being marketed as the live-action remake, it's actually... not quite that. While speaking with SlashFilm about whether the film's technical genre is considered animated or live-action, Favreau said, “It depends what standard you’re using. Because there’s no real animals and there’s no real cameras and there’s not even any performance that’s being captured that’s underlying data that’s real. Everything is coming through the hands of artists.”

Those artists, of course, are the voices of those who were photographed for today's portraits, the ones who not only voiced the narration of each character, but sang the beloved score as well. Though it's clear that technically speaking, the animation itself is significantly more realistic than it was in the original movie, the actors we know and love dearly will undoubtedly make it a truly epic and iconic piece of art.