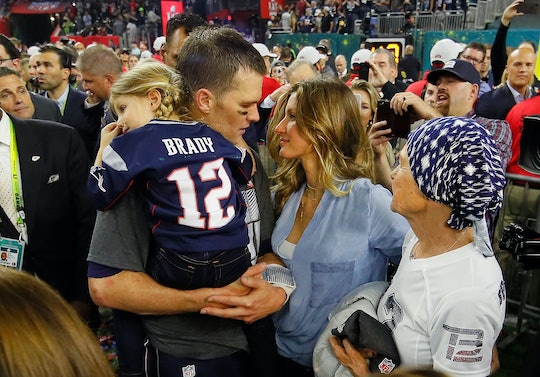 A good partner is with your for the highs and the lows. And when you're a star professional athlete, the highs are really high and the lows are really low. As that athlete's partner, you have to be both apt at cheering them on and cheering them up. And these photos of Tom Brady and Gisele Bündchen at past Super Bowls show that the two of them are a team no matter the outcome of the game.

Brady and Bündchen have been an item since 2006, according to ABC News. And in little over a decade, the supermodel has been with him through three league MVP awards, five Super Bowl wins, and four Super Bowl MVPs, as ABC News reported. Time and again she has proven herself to be his biggest fan, both on and off the field.

As the New England Patriots gear up for Super Bowl Sunday, Bündchen has been busy showing her support for her beau, with the help of their two kids. As Us Weekly reported, she posted a series of Instagram Stories leading up to the big game. In the stories, she gave shoutouts to Brady, expressed her love for him, and even shared his post-game interview when he found out his team was returning to the Super Bowl yet again.

Bündchen will likely be in the stands screaming her support for Brady on Sunday. And no matter the turnout of the game, she will be the support he needs. How can I be so sure? Just take a look back at a few of their past Super Bowls together.

Bünchen isn't the only member of Brady's family who shows up to show support. Before last year's Super Bowl, Brady posted a photo to his Instagram of his wife and their family on the field celebrating. Who needs a cheerleading team when you've got a family like this one?

The Patriots didn't take home the ring last year, but Brady got to take home the ultimate prize: a supportive spouse. She posted the sweetest photo of her and the fam hugging on Brady after the loss along with this message:

Congratulations Eagles for winning the Super bowl, what a game that was! Congratulations Patriots for giving your best and to my love, we are incredibly proud of you because we are able to see every day all the commitment, sacrifice and hard work that you have devoted to become the best in what you do. We love you!

OK, technically this one is a video. But her reaction to the Patriots' win in 2017 was priceless. Who wouldn't want to see their loved ones react that way to their success?

Along with GIF-worthy celebration in the stands, Bündchen also penned a post to her hubby following the 2017 win and posted it to Instagram. The two of them cuddled up close in a photo and the love they share jumps through the screen. Along with the snap, she wrote:

Wonderful things come to those who work hard with focus, tireless dedication and who never stop believing. Forever grateful for this moment. Congratulations my love!!

Yup, 2015 was another winning year for the New England Patriots. How did Brady and Bündchen celebrate the team's victory over the Seattle Seahawks? With smooches, of course. Could they be any cuter?

While you're all busy watching the actual football game, I'll be busy scanning the stands for any evidence of that specific brand of Brady-Bündchen cuteness that shows up every year. If these two aren't #CoupleGoals, I don't know who is.