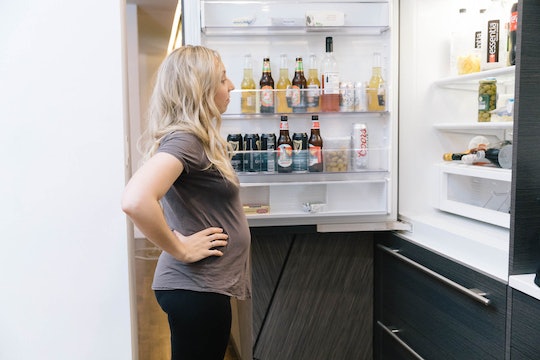 The miracle of life is beautiful, but let's be honest: Pregnancy comes with some totally whack symptoms. What will your body do next? Who knows! It should be a drinking game — except, oh yeah, you can't drink. One such inconvenient pregnancy side effect is the insane amount of sweat your body produces. Whether you're sleeping, working out, or just trying to go about your mundane daily business, let's face it: You're, ahem, glistening a lot more than usual these days, and you're in dire need of some pregnancy sweat relief tips.

I've had two December babies and one May baby, and I couldn't tell a difference between the amount of sweat I generated in the opposite seasons. Pregnancy hormones are pregnancy hormones, no matter what time of year — although my friends who have delivered at the end of summer would probably argue this point. But I'm pretty sure you could live in the arctic and still sweat profusely through the entire length of gestation: That's just the way pregnancy is.

The upside of that fact is that millions of women have gone before you in the pit-stained trenches, so there's no lack of tips about how to handle it. And luckily, many of them really do work.

The first major culprit of pregnancy sweat is your boobs. While underwire or sports bras may be feel more supportive of your likely larger ladies, those styles tend to trap heat and increase sweat, too. The Huggies website suggests looking for maternity bras with wide bands that sit flat underneath the breasts and against the rib cage, preferably made of a cotton/Elastane combination that allows the skin to breathe.

Another little known tip for boob sweat during pregnancy? Gold Bond. Yes it's made for feet, but according to Healthline, the powder can be valuable for preventing and treating heat rash under or between your breasts. Since the powder is medicated, it's best to get the green light from your doctor or midwife before applying.

But your breasts aren't your only feminine body part sweating a little more these days — your crotch might be experiencing the same. A dermatologist explained to Women's Health that there are two kinds of sweat glands, apocrine and eccrine, and that your groin has a higher density of both than any other part of your body besides your armpits.

So what can you do about that area? According to the University of Iowa, using Gold Bond on your vulva is not medically risky, but you should check with your healthcare provider just in case. The university warns against douching, but does say that a warm baking soda rinse can help eliminate vaginal odors. But the most basic way to combat crotch sweat is simply to shower daily (even twice a day if you want) and change your underwear frequently.

Of course, you can't talk about pregnancy sweat without also talking about those glorious hot flashes. These middle of the night sweat attacks were the worst for me, and I'm not alone. In 2010, the University of Pennsylvania released a study that found more than half of all pregnant women are affected by hot flashes, most on a weekly basis for the first half of pregnancy, Today's Parent reported. The sudden onslaught of body heat is a result of fluctuating levels of hormones, namely, estrogen.

To combat pregnancy night sweats, Babble suggested blasting the A/C in your bedroom, wearing nothing to bed, and using cotton or percale sheets. While these may help and definitely don't hurt, I never personally found a foolproof cure for night sweats. But the good news is, in just a few months they will be a thing of the past — that is, until the postpartum sweats.