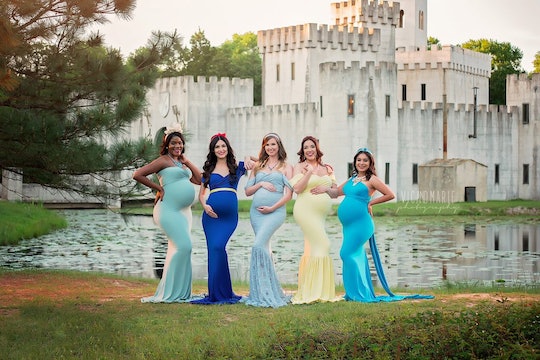 These Pregnant Disney Princesses Will Make Your Dreams Come True

Plenty of women want to be princesses. But few get a chance to do so as wonderfully as these pregnant women who dressed up as Disney princesses for a photo shoot. We're entering a whole new world for maternity photography, folks, and it is shining, shimmering, splendid.

Houston-based husband and wife photography team Vic and Marie are the artists responsible for the series of magical photos, which feature women dressed up as Belle from Beauty and the Beast, Tiana from Princess and the Frog, Jasmine from Aladdin, Snow White from Snow White and the Seven Dwarves, and Cinderella from Cinderella. They gathered five expectant mothers and went to the fairy tale-worthy Newman's Castle in Bellville, Texas. Then, the women slipped into some gorgeous gowns, and got into character. The woman who played Belle got a red rose, while Cinderella held a glass slipper. In the photos, they've all got the mom-to-be glow in spades.

The story behind the Disney photo shoot could be a movie in its own right. Vic and Marie told POPSUGAR that they found out they couldn't have children of their own and, after taking some time to heal from a miscarriage and their disappointment, they decided that they wanted to do something creative, while helping expectant parents celebrate. That's when they got inspired by the recent Emma Watson remake of Beauty and the Beast.

We wanted to go outside of that box, something no one had tried to do as of yet, and then it hit me, why not do all of the princesses in a group shot, expecting sweet little babies, and showing off their beautiful bump in a creative way? It was a fun project for me being a huge fan of classic stories and movies I grew up to and it was a fun project for Vic because it allowed him to do something he normally doesn't get the chance to do often.

While the internet has been into all things Disney princess for years now, this photo shoot might be the most magical use of childhood nostalgia yet. And think how bowled over these kids are going to be once they get into Disney for themselves — and see the photos of their moms all dressed up like their favorite princesses.

Vic and Marie told HuffPost that the pregnant Disney princess shoot wasn't without its challenges, like plenty of pee breaks and "one mommy close to giving birth," but that they "managed to make it come together beautifully." Hear, hear!

After some of the less glamorous aspects of pregnancy — the morning sickness, the weird cravings, the strangers thinking it's cool to touch your belly — no wonder the five women in the photo shoot look so happy to get all dressed up, and make their dreams come true.