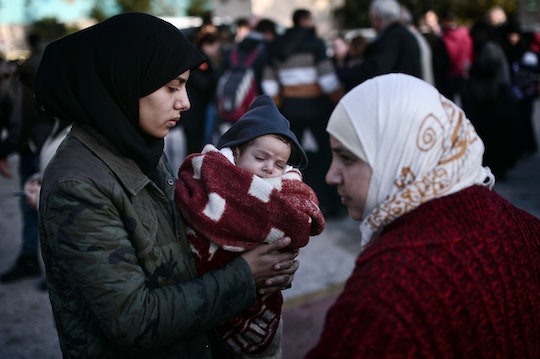 These Refugee Babies Don’t Have Enough Milk, & No One Can Help Them

Asylum seekers detained on the Greek island of Chios are claiming that their babies aren't being provided with enough formula, The Guardian reported on Tuesday. While refugees were previously able to move through Greece to other European countries, a deal made between Turkey and the European Union that went into effect on March 20 has forced all asylum seekers coming in from Turkey to be detained on the Greek islands. Refugees must either register for asylum in Greece, or be sent back to Turkey, according to TIME (all other borders are closed). The process can take weeks, and in the interim, refugees are held in closed detention centers, surrounded by barbed wire.

The refugees have alleged that the camps don't provide adequate food, security, medical attention, or even reliable running water. The claims are backed up by several humanitarian organizations who have visited the VIAL facility, including Human Rights Watch, Doctors Without Borders, and Amnesty International. In addition to the camps failing to meet the needs of pregnant women, children, the elderly, and the disabled, babies who are unable to be breastfeed are reportedly receiving just 100 milliliters of formula (or "baby milk," as it's referred to in Europe) per day. That's less than four ounces — which is what most infants require every three to four hours — for a whole day.

The worst part of all of this is that there seems to be no clear way to help these children. While I did find a charming grassroots charity called Solidarity Cafe that's currently "occupying" a house on Chios in order to provide food, tea, and a "chill out-area" for refugees, that's only helpful to those outside the fences. Unfortunately, the only organization currently addressing the milk crisis seems to be a radical anti-formula group that claims that the inability to breastfeed is a myth, which is an assertion that's patently false, insulting to all women, and particularly despicable when used to shame refugee women who've been imprisoned for the "crime" of trying to get their children away from a war zone.

The entire system of how Europe is handling refugees needs to be overhauled. Sure, there are reputable charities to donate to – Public Radio International has a good list to start with) – but the goal should be to get these people out of the camps entirely. They've done nothing wrong. They're not terrorists; they're running from terrorists. And let your elected officials know by using this link that just because we don't have a dog in this fight doesn't mean we shouldn't care. Maybe an American doesn't have a lot in common with a Syrian being detained in Greece, but there's at least one thing: we're all human beings, and that's enough of a reason to care about them. Take a few minutes to bang out an email and send it to a few people in power. It's the least we can do, really.