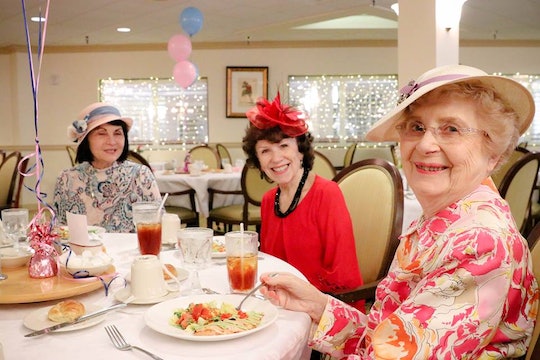 These Seniors Held A Royal Baby Shower & It Was Everything

The wait is almost over. In just a few short weeks (or sooner, who knows) the world will have another royal baby. This time it's newlyweds Meghan Markle and Prince Harry who are awaiting the arrival of their first child. With all the royal pomp and circumstance, there's bound to be a few celebrations happening within the royal family. But just one or two showers for the royal baby just isn't enough. The crafty and royal-obsessed people in this Boca Raton senior living facility decided to join in on the fun. These seniors held a royal baby shower and it was everything you'd expect it to be.

A group of royal fans at St. Andrew's Estate, a senior living facility in Boca Raton, Florida, threw their own shower for the Duke and Duchess of Sussex in celebration of their impending bundle of royal joy, according to People.

This isn't the first time the ladies of St. Andrew Estate threw a party in honor of a royal event. They also celebrated the royal wedding of Meghan Markle and Prince Harry complete with a queen impersonator, Lisa Sileo of Acts Retirement-Life Communities tells Romper.

Because the Duke and Duchess will not know the sex of the baby until birth, there were both pink and blue decorations, according to People. Guess the number of candies was a popular game amongst attendees.

But they didn't forget to pay homage to good ol' England. Partygoers wore extravagant fascinators (or hats, to us Americans), sipped tea, and at bite-sized sandwiches and crudités.

And there were presents — a lot of them — although they won't be going Markle. St. Andrew's Estate is donating the baby-related items to Healthy Mothers, Healthy Babies of Palm Beach Florida, according to the South Florida Sun Sentinel. They fulfilled the charity's wish list by supplying gifts of baby formula, wipes, bottles, and new clothing.

"It’s a creative way to help local mothers and celebrate the royal baby due this April," Sileo told the Sun Sentinel.

Usually, events like baby showers are frowned up by the royal family. Because the royals are already, "very wealthy, a lavish baby shower would be seen as highly inappropriate. There's nothing they can't go out and buy themselves," Victoria Arbiter, a royal expert told The Sun, according to Harper's Bazaar Australia.

The same went for for Meghan and Harry's wedding registry, according to InStyle. They asked guests to make donations to charity rather buy traditional wedding gifts like china or a toaster. The world has enough toasters, right?

But there's also another reason. Baby showers just aren't as popular in England as they are in the United States, according to Babble.

But with Meghan being an American, she did travel to NYC to have a baby shower with some of her closest friends. Although it was a quite celebration (of course), it still had all the making of a traditional shower.

Co-hosted by friend Serena Williams, other celeb guests included Amal Clooney, Gayle King, actress Abigail Spencer, and stylist Jessica Mulroney, according to The Cut. The highlight of the event? A flower-arranging lesson from a celebrity florist.

It's anyone guess as to when the royal baby will arrive, but it's surely almost time. Until then, royal fans will just have to wait to see the new addition to the royal family. One thing's for sure, he (or she) is bound to be cute.