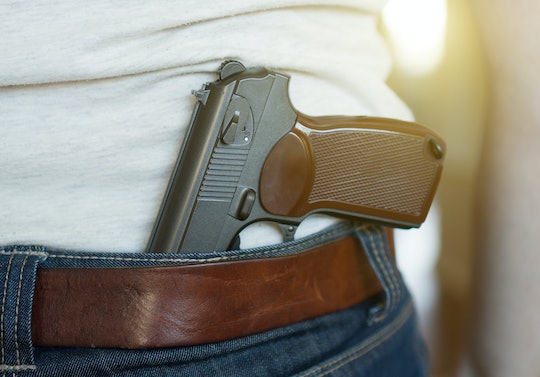 These States Allow Teachers To Carry Guns On Campus, & It's Terrifying

On Feb. 14, a 19-year-old entered Marjory Stoneman Douglas High School and murdered 17 people — students and teachers — with a semi-automatic assault rifle. Since that horrific day, gun violence has remained a hot topic in the news, thanks in part to student survivors who have passionately fought for common-sense gun safety legislation. The Parkland, Florida, massacre has also inspired nationwide walkouts, along with the March for Our Lives back in March. However, in the wake of this school shooting, a number of districts have also considered arming teachers and/or staff members. In fact, these states already allow teachers to carry guns on campus, and here's why that's a problem.

As it does after most school shootings that make national headlines, the concept of arming teachers became a topic of conversation. Not long after the Parkland shooting, President Donald Trump voiced his support for arming teachers as a deterrent for potential attacks, NBC News reported. "This crazy man who walked in wouldn't even know who it is that has (a gun), that’s good. It's not bad, that's good," Trump told conservatives in National Harbor, Maryland. "And a teacher would've shot the hell out of him before he knew what happened." Yeah, I'm not so sure about that.

The thing is, plenty of teachers and/or school staff members are already carrying in schools across the nation. An analysis by the Education Commission of the States show that at least 10 states allow staff to either possess or have access to a firearm on school grounds, The New York Times reported. According to the Education Commission of the States, these states include:

In Sidney, Ohio, biometric safes with semiautomatic Glock handguns and extra magazines are kept throughout the school. These safes can only be accessed by a designated staff member's fingerprint. “We can’t stop an active shooter, but we can minimize the carnage,” John Scheu, superintendent of Sidney City Schools, told the publication.

And don't even get me started on school districts in Texas, which have apparently been arming staff members for more than a decade, according to The New York Times. Harrold Independent School District, for example, has allowed armed personnel to carry concealed firearms as part of its guardian program since 2007. And teachers at Agyle High School carry handguns, according to the Los Angeles Times. Although school boards in Texas must approve arming teachers, at least 170 districts allow employees (and some schools, board members) to carry firearms, according to the Los Angeles Times.

In March — much to the dismay of the Parkland community — a Florida state legislative committee approved a "school marshal" program that would train and arm teachers. More Florida school districts have entered the conversation in recent months, as well. And Pike County Schools in Kentucky have taken steps in the same direction, too.

For some reason, an increasing number of school administrators believe that bringing guns into schools will solve the gun violence problem. Here's the thing, though: Experts have said it isn't clear if policies allowing school staff to carry reduced the likelihood of school shootings or the death toll, the Los Angeles Times reported. In fact, an editorial from The Chicago Tribune perfectly outlines the potential risks of such policies:

There are tens of thousands of schools across the country. What are the chances of an armed, trained, literally-cool-under-fire social studies teacher taking down a gunman? The odds are much higher of an accidental discharge during study period, or a disturbed student disarming the teacher. Worse, we picture an angry teacher on a bad day pulling a gun on a student with an attitude. And if there were a shooter in the hallways? Given the chaos, terror and suddenness of an attack, chances are an armed teacher strikes a bystander, or gets shot mistakenly by law enforcement rather than disarming or disabling the bad guy.

Just this past week, a Stoneman Douglas teacher who volunteered to carry at school proceeded to forget his loaded gun in a public restroom, CNN reported. Sean Simpson, a chemistry teacher, removed his 9mm Glock pistol to use the bathroom at Deerfield Bean Pier on Sunday, and then accidentally left it in the stall when he went to wash his hands. Although Simpson realized his mistake about five minutes later, a homeless man had already found the gun and fired a shot. The Stoneman Douglas teacher was arrested and charged with unsafe storage of a firearm, according to CNN. Simpson was later released after posting a $250 bond, according to Fox 17 News. Romper reached out to Sean Simpson, but did not immediately hear back. Clearly, none of this happened in a school; but it is one example of the potential danger of having guns in schools.

Look, I realize there's no quick fix to the gun problem in the U.S. But there are things we can do to help the situation, such as making it harder to buy guns and making background checks more extensive when purchasing firearms. Perhaps, passing red flag laws could also help the serious gun violence problem in the U.S. But arming teachers —who are there to educate and nurture our children, not make split-second decisions on whether to shoot them? The risks seem to far outweigh the possibility of a teacher stopping an armed intruder. And these are definitely not risks I want in the classroom while my children are trying to get an education.