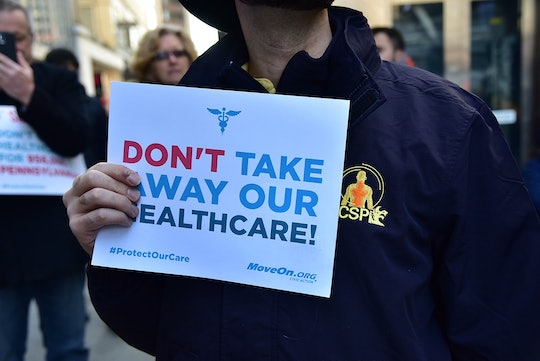 States That Didn't Cover Pre-Existing Conditions Before The ACA

In addition to removing the ACA's mandate that insurance companies must not deny coverage to those with pre-existing conditions, under the proposed health care bill (which has yet to be voted on in the Senate, and will likely face a number of edits), ailments such as asthma, acne, c-sections, and postpartum anxiety are now all considered pre-existing conditions, if they weren't already before. Depression, menstrual irregularities, and pregnancy are just a few more examples of what Trump considers a pre-existing condition — and that could cost Americans their health insurance if states are once again allowed to deny coverage based on those conditions.

It's a scary prospect for those suffering from serious illnesses that require ongoing medical attention. So, how many states didn't cover pre-existing conditions before the ACA? Unfortunately, quite a few.

HuffPost reported that 35 states chose to run high-risk pools for people with pre-existing conditions who couldn’t get private insurance before the ACA. (That's a whopping 70 percent of our country.) According to HHS officials, among others, some of the states on the list included:

High-risk pools are subsidized by the state government and allow insurance companies room to reduce premiums for those without pre-existing conditions. The biggest problem with high-risk pools is that they are extraordinarily expensive because, as HuffPost points out, "they're full of sick people with high health care costs." In theory, the government could keep costs down for all patients through high-risk pools by "funnel[ing] tons of taxpayer cash" into them. This doesn't seem to be the case with the GOP's new health care plan, however, because The Center for American Progress estimates that the bill falls $200 billion short to actually make high-risk pools work.

The AHCA still has to be passed by the Senate before it can be implemented as a federal law. Until then, keep the above information in mind if you live in one of the aforementioned states — you might find yourself needing it again soon.