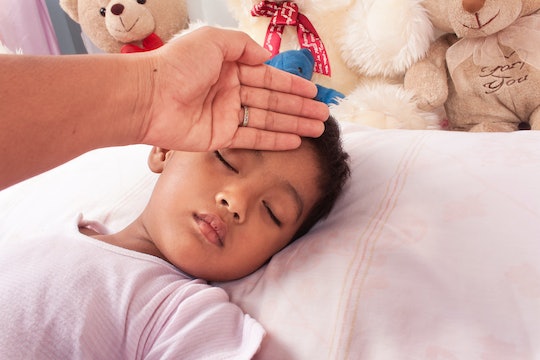 These States Have The Biggest Deadly Flu Outbreaks, & Here's What Experts Say You Need To Know

Keep washing your hands and signing up for flu shots, people, because it's been a particularly tough flu season so far, and there's no end in sight. Influenza is still spreading, and the flu is widespread in every state in the country except for Hawaii. Over 30 states plus Puerto Rico have reported high levels of influenza-like illnesses among residents, and some states are experiencing a worse flu outbreak than others. Every single state seems to be impacted by the deadly flu outbreak in some way, so if you weren't taking it seriously before now, it's well past time to do what you can to try to prevent this illness spreading even more.

The Centers for Disease Control and Prevention release weekly reports about influenza in the United States, and the numbers aren't looking good for January. In general, more than 60,000 samples testing positive for influenza have been reported since monitoring began on Oct. 1, according to the CDC. This year's flu has been particularly severe, partly because the Influenza A H3N2 strain is so rampant this time around, and the current flu vaccine is less effective against H3 viruses, according to the CDC and TIME.

During flu seasons with predominantly H3 viruses, the U.S. tends to see more serious cases of the flu, TIME reported on Wednesday. These more severe cases are especially prevalent in young children and elderly adults, so parents need to be particularly vigilant in trying to prevent the spread of the illness to their kids.

As of Jan. 13, the flu virus was widespread in every state except Hawaii, but even local cases of influenza were still reported there, according to TIME. Thirty-one other states and Puerto Rico reported high levels of influenza-like illnesses:

And nine states experienced "moderate levels of reports," including:

But some places have been hit harder than others. California, for example, reported 32 flu deaths of people under 65 in just a week, according to Patch. So far, the state has reported a total number of 74 deaths this season. New York and Florida are also on the "high levels" list, TIME reported.

These numbers might make the situation seem hopeless, but there are still definitely things you can do to try to prevent you or your kids from getting this year's deadly flu.

So far, 30 children have died from the flu this season. Of that number, 85 percent had not been vaccinated, said Dr. Brenda Fitzgerald, a Director at the Centers for Disease Control and Prevention. Fitzgerald said, according to Reuters:

My message is, if you haven’t gotten a vaccine, please get a vaccine. Also, please get your children vaccinated.

Interestingly enough, current numbers don't indicate that this flu is an epidemic of "rare proportions," according to USA Today. And unlike places like California, the flu isn't widespread in Washington, D.C. or Guam, in addition to Hawaii, just yet. But this season could approach the levels of the last "moderately severe flu season," back in 2014-2015, and it's definitely nothing to sneeze at (pardon the pun). If nothing else, the number of children, particularly unvaccinated kids, that have died this flu season should give parents enough reason to try to combat it as much as possible.

Experts say when it comes to kids and the flu, there are several things they want parents to know. The first is that yes, the vaccine is a good idea, so talking to your child's pediatrician about that is a good first step. There could be as many as 13 weeks of flu season still to come, according to TIME. So it's definitely not too late to get vaccinated, or to get your kids vaccinated.

Dr. Joshua Schaffzin, a pediatric infectious diseases physician and director of infection, prevention, and control at Cincinnati Children’s Hospital, told ABC News that parents also need to "listen to their gut instincts" if their kid gets sick, and just watch for any particularly abnormal behavior. When in doubt, call a doctor.

In addition, parents need to make sure they take care of themselves this flu season. Washing your hands and avoiding other sick people is important whether you're 3 or 30. Just because kids are particularly vulnerable to the flu, that doesn't mean parents should ignore their own health, because adults can certainly get it as well and then transmission to kids is more likely.

Everyone needs to work together to try to prevent the spread of the flu this season. Whether you live in Alabama or Wyoming, whether you have kids or not, this flu is no joke, and doing everything you can to keep from getting it and spreading it should be a priority.