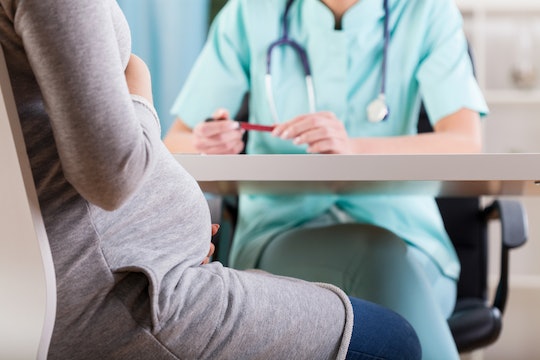 Unfortunately, sexism is still alive and well in today's society. Women still get paid less than men for the same work, and have to deal with constant catcalling and other micro-aggressions. Indeed, being a woman is not an easy gig. And being a parent, that's even more stressful — especially because these stats show how health care can discriminate against some moms and seeing these numbers will absolutely infuriate you. From the staggeringly high level of maternal deaths in the United States, to the high cost of care for women, there is no doubt that health care discriminates against some more than others.

The subject of health care has been a pretty hot topic this past year, but the truth is, that it's a pretty important issue all the time. And while it's unfortunate that the American public was only a few votes shy of having health care legislation changed — and possibly taken away — the Senate's failed bills did serve a greater purpose. Because now, more Americans are aware of how important proper health insurance is, and how much it effects the daily lives of so many.

Especially considering the fact that women who are preparing to become mothers, or who already are mothers, have significantly more health issues to worry about than the average man, it's no surprise that health care discriminates against some mothers. But that doesn't make it any less ridiculous. Nevertheless, these stats are important to know as the fight for equal access to health care wages on.

Perhaps one of the most important statistics is that of the maternal death rate in the United States. As Rewire reported, "the tragedy of maternal death affects Black women disproportionately in the United States as they are nearly four times more likely to die from pregnancy-related causes than white women." To put this into context, here are the statistics from the Centers for Disease Control and Prevention that confirm this tragic statement:

And because black women are more likely to die from childbirth, health insurers may be less likely to offer proper coverage, especially if a Republican health care plan, like the AHCA, eventually passes.

While Obamacare sought to increase access to health care for those who previously couldn't afford it, it isn't perfect. A 2013 study by the Kaiser Family Foundation reported that "one in four women have had to delay or forgo care in the past year due to cost compared to 20 percent of men." And while a possible reason for this statistic is the wage gap between men and women (which is actually worse for mothers), that's not all.

The study also reported that 15 percent of women explained that getting childcare was a major factor that prevented them from getting in to see the doctor. So yes, being a mom does make it harder to get proper health care.

But pregnancy-related mortality and the cost of health care aren't the only things that could cause potential discrimination towards moms. Before Obamacare, insurers could list C-section births as pre-existing conditions. Luckily, for now, the Affordable Care Act has changed that.

But for the one in three women in America who deliver via C-section, health care could become a precarious situation. If Republicans pass legislation one day and do away with Obama-era mandates, then even more moms will be discriminated against in the world of health care. And since so many already aren't receiving proper care, that really isn't OK and this issue needs to be addressed.

More Like This
Banana Boat Sunscreen Has Recalled Products That Were Found To Contain Benzene
New York Can End Religious Exemptions to Vaccine Mandates, Says A Federal Appeals Court
9 Labor Day Weekend Getaways In New England That Are Perfect For Families
Gathre’s Winnie The Pooh Collection Is Finally Here