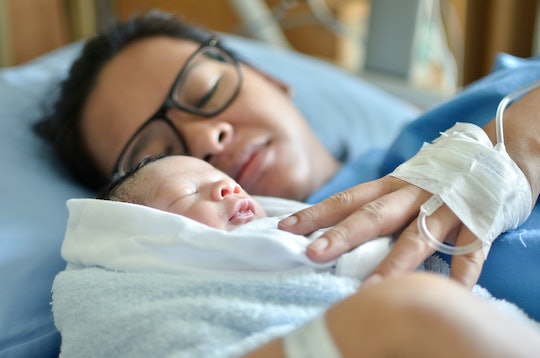 Anyone whose ever given birth knows that it's a major life change — in addition to the physical recovery involved with delivering a child, you're also dealing with fluctuating hormones and sleep deprivation, not to mention the often-overwhelming adjustment to being entirely responsible for keeping a tiny, helpless human alive and well. In other words, welcoming a new baby is not exactly easy, even under the best of circumstances. But for women who also have to return to work soon after, the reality is much worse: studies show that going back to work too soon is bad for moms' health, and the implications can be huge.

That shouldn't really be a surprising conclusion — how could going back to work right away not be difficult for a woman who's just had a baby? But it's also not even close to being an inevitable problem. Sure, there are many stressful aspects of new motherhood that can't always be avoided, but the lack of paid parental leave in the United States is an issue that can absolutely be solved. Although it's infuriating that there hasn't been much progress, there is plenty of evidence to make a clear case that ensuring adequate leave for parents is a good idea for so many reasons. And, honestly, it's way past time that it's taken seriously.

On paper, the federal government's Family and Medical Leave Act (FMLA) allows women 12 weeks of time off from work after giving birth to care for their babies, according to CBS News. But compared to pretty much every other developed nation in the world, that is a pitifully short amount of time: according to The Huffington Post, many countries, including Canada, Sweden, and the UK, offer mothers at least a year.

But the 12-week figure also doesn't even come close to representing what maternity leave in the United States actually looks like for most women. For one, the FMLA only guarantees 12 unpaid weeks of leave, which means that, unless your employer offers additional maternity benefits (or unless you can happen to afford to not work for 12 weeks) taking that much time off just isn't going to be an option for many mothers. Then there's the fact that the FMLA only actually applies to those who specifically meet eligibility requirements: according to the United States Department of Labor, to be entitled to a 12-week, unpaid maternity leave, you must work for either a public agency or a private sector employer with 50 or more employees, and you have to have worked there for at least 12 months and have put in at least 1,250 hours in the year before taking your leave.

What's worst though is that, even when a woman is able to take 12 weeks of leave, it usually still isn't enough. Yet far too many women don't even get that: according to The Washington Post, a 2015 report analyzing data from the Department of Labor found that as many as 1 in 4 new mothers return to work within two weeks of giving birth — and that only 13 percent of workers in the United States actually have access to any paid leave at all.

How does that affect new moms' well-being? Here's what the research says:

It Takes A Big Toll On Their Mental Health

According to the Centers for Disease Control, it's estimated that as many as 1 in 9 women in the United States experiences postpartum depression. Not only can that be serious and absolutely crippling, it also often requires some kind of treatment to improve, and even recognizing that you're suffering from it can take time. There are a variety of different risk factors involved with PPD to be sure, but going back to work too soon can definitely have an impact.

In a 2004 study published by the National Bureau of Economic Research, researchers Pinka Chatterji and Sara Markowitz found that women who return to work later report fewer symptoms of depression than those who go back sooner. In a follow-up study published in the Journal of Mental Health Policy and Economics in 2012, Chatterji and Markowitz also found that not only were women who took fewer than 12 weeks of maternity leave more likely to show symptoms of depression, but women who had less than eight weeks of paid leave were more likely to experience poorer health in general compared to other women.

It seems pretty clear though that 12 weeks should just be the beginning of what's considered an acceptable amount of leave: a 2013 study published in the Journal of Health Politics, Policy and Law found that women who return to work earlier than six months after giving birth are more likely to develop PPD than those who were able to spend more time at home.

Breastfeeding Is Less Likely To Happen

The American Academy of Pediatrics recommends that mothers breastfeed their babies for at least a year, according to the National Institutes of Health, and exclusively for the first three months. But studies show that moms who have to return to work earlier are less likely to actually do it: a 2011 study published in Pediatrics found that women who return to work within six weeks of giving birth are less likely to be breastfeeding their babies three months after delivery.

Part of the reason is likely to just be logistical — it's hard to breastfeed your child and go to work, particularly if you don't have enough support to pump at the office, for example. But as University of California, Los Angeles OB-GYN Dr. Leena Shankar Nathan explained the CBS News, an early return to work can also impact your milk supply, meaning that even moms who want to continue breastfeeding may not be able to. She said,

Often times if you go back to work early, your milk supply hasn’t really established itself, so you pump and you’re not making as much milk and it gets very frustrating, which leads a lot of women to actually stop nursing all together.

Since breastfeeding offers important health benefits to both mom and baby, access to longer, paid maternity leave definitely needs to be more of a priority.

There's a general notion that most women will have recovered from child birth around the time of their six-week postpartum checkup — which is already not-so-great news for all of the women who have returned to work at least two full weeks prior. But research shows that physical recovery can actually take much longer.

An Australian study published in the International Journal of Obstetrics and Gynecology in 2000 found that even at six or seven months postpartum, many women still experience exhaustion, back pain, urinary incontinence, sexual problems, and perineal pain linked to their delivery. And in 2012, researcher Dr. Julie Wray at the University of Salford in the UK found that, more accurately, recovering from child birth takes closer to a year. In other words, offering women a few months of unpaid, hard-to-access leave is far from being enough time for them to actually bounce back, even if it seems like it should be sufficient.

Of course, returning to work is a necessity for many women, even if their employers offer accommodating maternity benefits, and it's also something that many mothers want to do (staying home full-time with an infant or toddler is certainly no walk in the park). But when it comes to maternity leave in the United States, the current policies pretty much seem to treat the issue as though it's optional, and the lack of an actual federal paid leave policy sends the message that ensuring that women have enough time after giving birth to be emotionally and physically well isn't a priority.

Returning to work before you're ready likely isn't a choice than any American woman actually wants to make, and in this day and age, it's ridiculous that anyone should even have to. But until maternity leave in the United States catches up even slightly to the rest of the world, it's a reality that far too many women will have to face.