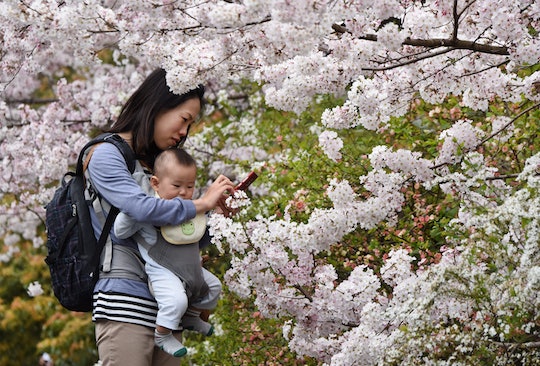 Turns Out, Being On Your Phone Too Much Does Affect Your Kid

I'm a workaholic, which means I am glued to my smartphone, sending emails and reading the news. Sometimes it causes me to miss special moments, so I'm trying to be more present for my toddler son. Still, I can't help but think about the impact my cellphone use is having on him. These studies about how being on your phone too much affects your kids paint a grim picture.

A 2014 anthropological study published in Pediatrics found that being distracted by your cellphone can impede your child's development. According to the researchers, children are more likely to act out for attention if their parents are sucked into their mobile devices. Being absorbed in your cell phone also interferes with your child's learning experience, the study found.

Kids learn primarily through face-to-face interactions, lead researcher Dr. Jenny Radesky told NPR. So when a parent is spending more time on their devices than their children, they are impeding their child's growth. Radesky said,

They learn language, they learn about their own emotions, they learn how to regulate them. They learn by watching us how to have a conversation, how to read other people's facial expressions. And if that's not happening, children are missing out on important development.

Parent's constant cellphone use may also set a bad example for their little ones. A 2015 global survey by AVG Technologies, an online security company, found that more than half of kids felt their parents checked their phones too often. And there seems to be some truth to that, because 52 percent of parents surveyed by AVG agreed that they check their devices too frequently.

Children take their cues from us for everything else, so it is only natural that they should do the same with device use. It can be hard to step away from your device at home, but with a quarter of parents telling us that they wished their child used their device less, they need to lead by example and consider how their behavior might be making their child feel.

Anscombe's last point is crucial, as research shows parents may also hurt their kid's self-esteem when they get absorbed by their smartphones. The same AVG survey found that nearly one-third of children feel unimportant when their parents become distracted by their devices. Nearly one-third. How heartbreaking is that statistic?

What's more, research published last year in Translational Psychiatry found that distracted parents may have a harmful impact on a child's development, according to TIME. In particular, parents sucked into technology or distracted in other ways may hinder their kid's ability to process pressure, the animal study found.

Researchers at the University of California-Irvine studied two groups of rats and their babies, according to TIME. One set of rats were placed in a modified cage that didn't have enough material for nesting. The other group of rats were set in a normal size cage with sufficient materials. What researchers found is that the baby rats raised in the modified cage spent less time playing than rats raised in the regular cage. Researchers surmise that it's because they received interrupted and unreliable attention from their distracted moms looking for material to make bedding, TIME reported.

Of course, I am not judging distracted parents; I am one myself. And for many of us, it's not intentional. I work from home and don't have my son in daycare because of financial constraints. So it's a very thin line I am straddling between being present for my son and being a good worker.

Still, these studies show me that I need to make certain changes to my daily routine so that I can give my son more of my attention, even when I'm distracted.