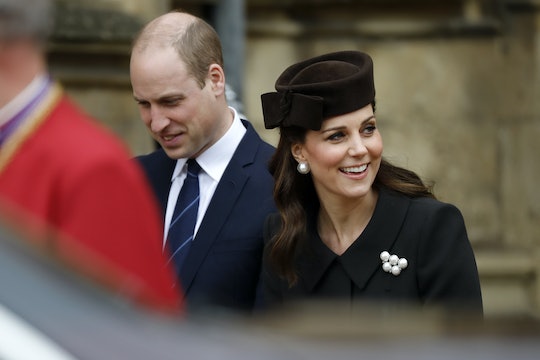 3 Theories About Kate Middleton's Due Date With Royal Baby No. 3

It feels like it's been forever and a day since Kate Middleton and Prince William announced their royal family would be growing by one. And now that their newest family member's ETA is actually just around the corner, it's hard to not to wonder whether any of these theories about Kate Middleton's due date with baby number three will turn out to be true once the royal infant arrives later this month. There are a few options floating around right now, so one of them could be right on the money...right?

Speculation and theorizing about the next royal baby's arrival didn't just start recently. As soon as Middleton's third pregnancy was confirmed, in fact, on Sept. 4, 2017, all royal watchers wanted to know when exactly he or she would be here. And, of course, the baby's sex and if they couple has chosen any names. But we'll have to wait for those, too.

This pregnancy is certainly exciting. Although Middleton's first two pregnancies were both highly publicized and historic, a third child in the first place means that even more history is being made. As Hello! Magazine reported, when Prince William and Middleton announced that they were pregnant with their third child, they became "the first royal couple – in the Queen's immediately family – to do so in 58 years."

Now that Middleton's due date is almost here — all that's been confirmed thus far as it's sometime in April — according to The Sun, it's clear that all of the theories about when Middleton could be due may have a good chance of being true. Here are some of the main theories floating around right now.

Some Think It'll Be A Patriotic Affair

One of the most prevalent theories surrounding Middleton's due date is a very patriotic one. According to The Sun, Middleton could give birth on or around April 23. While many Americans might not see any significance around that particular date, in the United Kingdom, it's actually "feast day of the patron saint of England," or, St. George's Day, per The Sun. As a source told the publication:

There's no certainty with due dates of course but the Duchess is working off a date around St George’s Day and it would be a lovely patriotic coincidence if he or she were born then.

Some Think She Could Also Give Birth On The Queen's Birthday

Another pretty popular theory is that Middleton might deliver her third child on Queen Elizabeth II's 92nd birthday on April 21, as some speculate that she's due sometime around April 23. Of course, due dates aren't always accurate, so, as The Daily Express reported, "if Kate is a few days early, the royal birth could fall on the Queen’s actual birthday."

What's more, The Daily Express also reported on what the good people of England thought Middleton's due date would be. "As The Duchess of Cambridge enters the final few weeks of her third pregnancy, the bookies have opened up betting on when the latest addition will enter the world, and the Queen's birthday is the early favourite at 10/1," the publication reported.

There are a lot of important dates in late April, it turns out, which means that Middleton's due date could fall on several important days. Since reports have speculated that Middleton is due around April 23, there are a lot of "what-ifs" involved. And as Metro reported, Prince William and Kate Middleton's seventh anniversary as a married couple falls on April 29, 2018. So, she might actually give birth on their anniversary, giving her husband a pretty great anniversary present.

Whatever the case ends up being, Middleton's due date is certainly not too far away and another heir to the throne is about to be born.