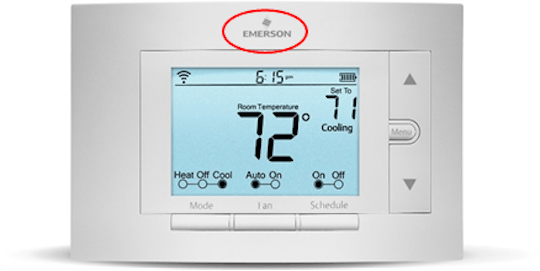 During cold weather, and flu and cold season, it's super-important to have a well-functioning heating system, so you should know that a major thermostat brand has experienced some issues as of late. These thermostats have been recalled due to fire hazard, so you need to know how to tell if yours is affected.

As Lexington, Kentucky CBS affiliate WKYT reported, the Emerson brand of thermostats has issued a recall involving some models due to the risk of a fire hazard.

"Safety is our top priority, which is why we voluntarily pursued a corrective action after learning of the potential hazard," White-Rodgers tells Romper in a statement. "The impacted units were distributed in the U.S. and Canada, and are no longer in production. We have launched a corrective action plan to inform consumers with impacted thermostats how to remedy the issue."

The recall, which was voluntary on the company's part, but has been noted by the United States Consumer Product Safety Commission, involves 135,000 models of the thermostat. Additionally, 15,000 units were sold in Canada, according to the Consumer Product Safety Commission. The items in question will have the word "Emerson" printed on the front, and a date code from 1416 to 1536 on the back.

The affected thermostats were purchased at Johnstone, Home Depot, and Golden State FC stores nationwide, with HVAC equipment distributors also offering the equipment, which means checking your Emerson thermostat just in case might be a good idea. The purchase dates for such models would have been between April 2014 to December 2016, with the price point ranging between about $90 and $150, according to the CPSC website.

For those with similar units in their home, these thermostats are white with an LCD screen and three buttons below that. Up and down arrows and Menu buttons are located to the right of the screen. The recalled thermostats are model numbers 1F86U-42WF and UP500W. A label with the model number and date code information is located on the back of each thermostat, so you can be sure.

Contact the company at the number listed below to determine if your unit is included in the recall and for the possibility of a full replacement.

It's important to make sure your household systems, especially your HVAC and smoke and carbon-monoxide detectors, are all up-to-date and working when you have small children in the house. Frequent checks of home-safety devices are something that it's easy for a busy family to forget about, or simply keep putting aside, but they're essential.

Recalls such as this are worrisome, but at least the news gets out fast and corrections can be made so that products function properly.

As Good Housekeeping noted, the past years have brought a number of high-profile recalls, including infant ibuprofen and certain infant carriers. But in the end, there are checks and balances in place to make sure the everyday products that families use are safe and I'm very grateful for that.

For more information on recalled thermostats, call 888-847-8742 or go to www.white-rodgers.com.