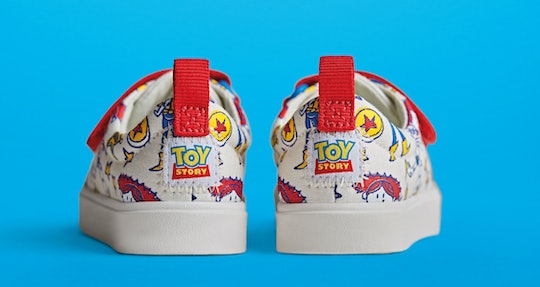 Toddlers can have a somewhat complicated relationship with their footwear, but a new collaboration just might change that. The Toy Story X Clarks Kids shoes feature some of their favorite characters from the hit movie series. When Buzz Lightyear is on their shoes, you may only have to ask them to get their kicks on once.

In honor of Toy Story 4’s release, Clarks created two playful shoe designs starring the show's most iconic characters: Woody, Jessie, Buzz, and the Aliens. The bold, pop-art style designs are sure to appeal to children and parents alike. These exclusive shoes will be available in select stores and online June 21, 2019. Time it right and your kid could rock these kicks while watching the Toy Story 4 film in theaters.

In addition to the cool designs, the footwear also feature some seriously smart construction designed for even the most active of toddlers. With cushiony footbeds, flexible soles, and lightweight uppers, these shoes are made for kids who explore. Retailing for $40 a pair, these shoes are a perfect blend of ‘90s nostalgia tailored to modern tots. It's so fun to share your love of these classic characters with the next generation.

It’s difficult to overstate the impact of the Toy Story franchise, even with the release of its fourth film. First released in November of 1995, the original Toy Story film chronicled the adventures of Buzz Lightyear and Woody, two toys competing for their owner Andy’s attention. The story and characters captured the hearts of kids everywhere, but there was something else remarkable about this film: Toy Story was the first computer animated feature-length film released in theaters, according to EDN Network, and it even featured Steve Jobs as executive producer. The movie marked a huge shift in animation for years to come.

For the tots who will be wearing these shoes, however, CGI-animated movies have always been the norm. It’s wild to think about, right?

Several successful sequels to the first film followed. In the latest installment, Toy Story 4, Woody helps Forky, a craft project, believe in his worth as a real toy. Longtime friends Buzz and Bo Peep also find new adventures in this expansion to the story. Like the other films in the series, it’s a blend of humor, adventure, and heart most kids will love. (Although I have a sneaking suspicion your kid will design a Forky lookalike right after the film, so maybe keep an eye on the silverware drawer.)

With its first shoe design dating back to 1825, Clarks has long been a leader in creating iconic shoes. The kids line at Clarks features a variety of sizes and widths to make sure your kid always has well-fitting footwear. Having studied the biomechanics of kid’s feet for over 70 years, the Clarks company knows how to create lightweight, stable shoes for children of all ages.

So for a new pair of shoes that are fun, on-trend, and made for active kiddos, this collaboration is perfect for any adventure. From the playground to the movie theater, these shoes are sure to be a hit.