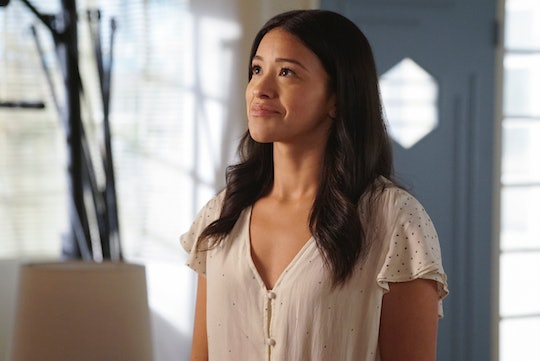 Jane The Virgin pulled off one of the most unexpected deaths I've ever seen in the Season 3 premiere when Michael Cordero (Brett Dier) apparently died of a heart condition. He's always been a fan favorite and when writers brought him back from TV death for the show's final season, fans kind of freaked out. But he's not the man of Jane's dreams anymore and tweets about Jane The Virgin Season 5 prove that viewers might never recover from all of the heartbreak (even if Jane has).

I don't blame them. All character exits are hard — especially when they're beloved. Viewers never really got over Michael's death and to bring him back only for Jane to reject him is cruel and unusual punishment.

Even back as far as Michael's heart-wrenching death, creator Jennie Snyder Urman knew the emotional turmoil she was putting fans through, because she felt a similar pain saying goodbye to Dier. But Michael's exit was an early decision in the series. "We kind of pushed and pulled with when it would happen and we pushed till later because Brett is just so magical and he and Gina are just so magical together. So we sort of kept it off as long as we could, but I feel like this is a telenovela," Urman told The Hollywood Reporter at the time. "There are always going to be these big, dramatic, life-changing events in the show, and one of them was what launched the series, when Jane was accidentally inseminated when her life was going along as planned and then spun into a totally different direction, and this is the second giant event."

If Michael's death was the second big event then Jane choosing Rafael even after Michael came back from the dead would definitely be a third. And it looks like a lot of Team Michael fans are pretty upset by this turn of events. Just look at the Tweets.

Like I said, I understand the anger but if I had to choose a partner for Jane, it's Rafael. So, I went in search of some happier tweets — or at least from people who were also Team Rafael.

Lately, Rafael has made it clear to Jane that he feels hurt and betrayed by her and he has no interest in getting back together right now. Meanwhile Jane has gone to some pretty extreme lengths to get him back, including some light stalking that she needs to cut out ASAP.

No matter where you stand on Jane's choice, Urman understands. She believes one's partner choice can change depending on their life circumstances. "I think there are different love interests and different people that are right for you at different times of your life," she told TV Guide after Jane decided not to stay with Michael. "And it's an extraordinary circumstance and so we're dramatizing it on a larger scale in terms of how much [Michael's] changed. But Jane really realizes that these five years and the changes that have happened have changed her, and Rafael is who she wants to be with."

So maybe Rafael is the end-game guy for her. And if that's not what you wanted for her, there is always fan-fiction!