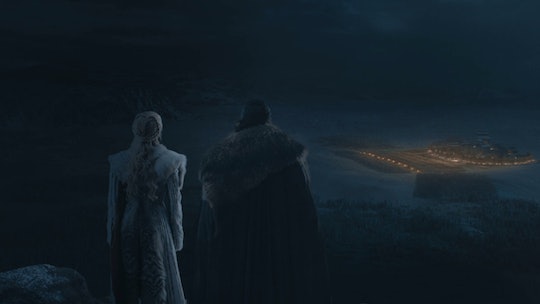 Ever since Melisandre rode off into the proverbial sunset to escape execution back in Season 6, viewers have been wondering when the red priestess would return. Well, the Battle of Winterfell brought her back, and she quickly went to work laying her fire-hands on everything. She made a pretty significant eleventh hour save and these tweets about Melisandre on Game of Thrones prove fans were ready to forgive.

The odds were definitively against the living as their various armies posted up at Winterfell prepared to do battle with the Army of the Dead. They were significantly outnumbered, and the Dothraki lasted approximately 40 seconds after Melisandre blessed their blades with the same fire treatment as the swords carried by followers of the Lord of Light. Next in line were the Unsullied, the Wildlings, and the other swordsmen of Westeros. They barely made a dent in the flow of wights storming the castle. So they fell back and signaled for Daenerys and the dragon she rode to set fire to the flammable trenches they had set up surrounding the castle. Except a massive snowstorm obliterated visibility and Dany couldn't see the signal. Enter Melisandre and her very flammable fingertips.

After an extremely tense chanting sesh (which allowed the Army of the Dead to come very close to gobbling her up), Melisandre finally managed to light the trench on fire with the Lord of Light's divine intervention (or whatever). "Stopped" would be a strong word to use, but the Army of the Dead were very briefly paused, at least.

She may have orchestrated the murder of a beloved character — Princess Shireen — for literally no reason, but fans were clearly grateful for Melisandre's intervention at the Battle of Winterfell. They were pretty quick to rejoice, granting her clemency for her past crimes, and just about everyone was sorry for everything bad they'd ever said about her. Unfortunately, her help was an extremely temporary fix.

The flaming trenches only briefly held back the Army of the Dead, but it gave the living a chance to fall back, get safely behind the castle gates, and regroup. Eventually, however, wights simply began sacrificing themselves to put out the flames. They crossed the trenches with relative ease and the castle was under siege yet again. The rest of the battle was about as gnarly as expected, but fans who had bets on Arya to kill the Night King came out on top. The Battle of Winterfell ended with a Stark taking him out (although just barely), just as he was about to kill Bran.

It was a blade of dragonglass to the heart in the end, since Daenerys' dragon engulfing the Night King in flames did little good. But the remaining wights (and the ice dragon) fell in unison, as expected. The war was won, but Melisandre was still alive and her prediction was that she'd fall before sunrise. In the end, she simply walked out of the castle gates, past the piles of corpses, took off her magical youth-endowing necklace, laid down in the snow as an old crone, and died.