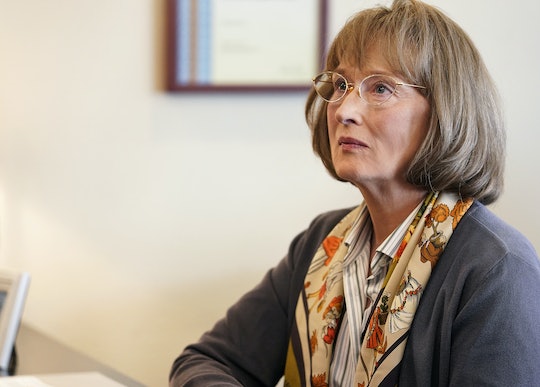 It's Madeline Vs. Meryl On 'Big Little Lies' & Fans Are Delighted

When it was announced that Meryl Streep was joining HBO's Big Little Lies for Season 2, fans couldn't contain their excitement. They were eager to see what the powerhouse actress would bring to a cast already stacked with talented performers. And these tweets about Meryl Streep on Big Little Lies prove fans are living for her character Mary Louise, Perry's grieving mother.

Mary Louise certainly made an impact from her first minute onscreen. She was popping by Celeste's house regularly to help out with her sons while also keeping an eye out for suspicious behavior. But while it was obvious she thought Celeste was hiding something, she saved all of her barbed comments for Madeline instead. They got off to the wrong foot right away in "What Have They Done?" Mary Louise informed Madeline that little people were untrustworthy, then doubled down with an in-depth read for filth later on. But she did it with a mild, quiet delivery that made her as instantly iconic as her magnifying glasses.

Streep's performance is going to be talked about for months to come, but fans on Twitter are already starting the conversation. Just like Mary Louise herself, they're not holding back on sharing their opinions.