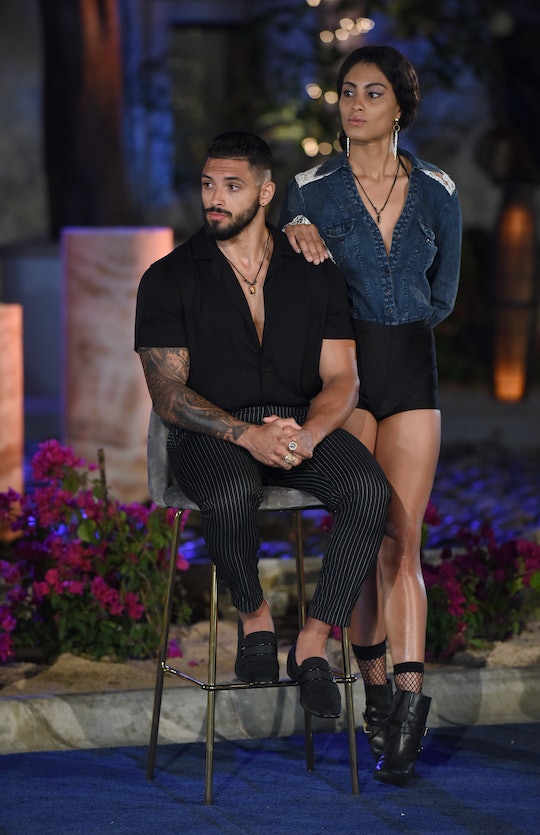 Twitter Is Furious About The First 'Paradise Hotel' Elimination

The first steamy reality competition of the summer is fresh off its season premiere, and tweets about Paradise Hotel prove that fans have already cast a villain and that villain is Carlos. In fairness, he was in a tough spot as the very first cast member forced to choose between two flames when both Deiondra and Marielena both chose him as the guy they wanted to continue relationships with. But Carlos didn't really make things easier on himself by promising both women they were his favorites and his number one pick to take into next week.

The 22-year-old "fitness entrepreneur" from Naples, FL claimed in his intro package that he was playing Paradise Hotel for both love and money, because "you can't really enjoy your money unless you share it with the ones you love." He identified his competitive nature and his looks as his two greatest strengths in the game, adding that "women tend to go towards the men who are confident because they feel protected." It looks like that strategy worked a little too well for him, and he found himself stuck between two contestants. Ultimately, he eliminated Deiondra, who admitted she was surprised and hurt that Carlos had lied to her. But the joke is on him; fans were quick to dunk on Carlos for dumping a woman from a very famous family.

Deiondra opted to keep her parentage a secret from her fellow cast members as a matter of strategy, but she's actually retired NFL star and football commentator Deion Sanders' daughter. Unfortunately, her strategy fell apart and she was the first contestant eliminated, which obviously bummed out fans who were looking forward to seeing how her proximity to fame would affect the dynamic at the hotel.

"It does worry me that men are interested in me because of who my dad is, so I feel like a lot of times that’s why I don’t tell them off bat," she explained in an interview with Us Weekly before her elimination. "There is a lot of pressure bringing a boyfriend home to my dad. It’s like, 'Are you meeting my dad or are you meeting your idol?'"

Then, there was the fact that, yet again, the contestants of Paradise Hotel fell into an age-old romance competition show trap by eliminating the cast's only black woman early on. Viewers weren't surprised, but they were understandably upset that she just so happened to be the first one eliminated.

Until then, I just hope Deiondra finds a guy more worth her time.