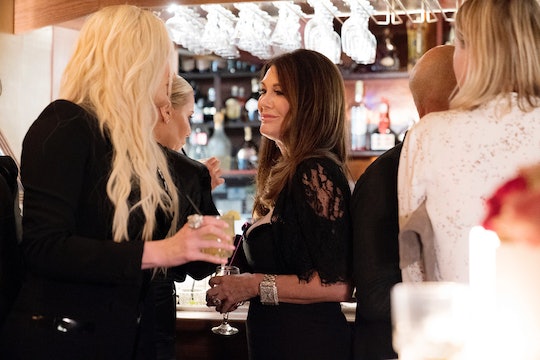 Ahead of this season's The Real Housewives of Beverly Hills premiere, rumors swirled about a feud so intense that some wondered whether Lisa Vanderpump had left the show. All that drama turned out to be about a puppy named Lucy, Dorit's questionable responsibility as a pet owner, and LVP's role in manufacturing a smear campaign. But these tweets about RHOBH Puppygate — the nickname bestowed upon the non-troversy — prove that fans are super over it.

Consensus seems to be that this particular feud has gone on for way too long to still be a viable storyline. It's painfully obvious to viewers that the show is trying to make a relatively minor incident stretch out over too many episodes. Several exasperated interviewers have even asked the RHOBH cast whether Puppygate goes on all season. (Teddi Mellencamp assured OK! Magazine in an interview earlier this month that it doesn't.)

But it does appear that Lisa's once esteemed position as an OG Housewife is in jeopardy after what her castmates believe is a pretty transparent set-up. Everyone seems to have moved past Dorit's role in the matter — rehoming a puppy she adopted from Vanderpump Dog Rescue with a friend, who ultimately returned the dog to a shelter.

Now, Puppygate is mostly preoccupied with whether Lisa instructed her Vanderpump Dog Rescue employees to tell Teddi and Kyle Richards that Dorit had returned the dog to make her look bad. Once details of what actually happened with Lucy came to light, Teddi claimed she had been manipulated by Lisa into confronting Dorit, putting her on blast for her seemingly cruel and irresponsible pet ownership.

In reality, Lucy had bitten Dorit's husband and toddler, according to E! News. After weeks of hoping for her aggression to subside, Dorit ultimately realized that rehoming Lucy was going to be the best choice for her family. A friend stepped in offering to take the dog, and she was the one who then brought Lucy back to a shelter. The Vanderpump Dog Rescue employees learned of the incident because their dogs are microchipped and a flag goes up whenever a dog of theirs reenters the shelter system.

"I think [Vanderpump] used me because of my past relationship with Dorit," Teddi told OK! Magazine, referencing her and Dorit's squabble over wine glasses. "And I don't think she thought I would figure it out."

Teddi continued in the same interview:

It was completely set up to punish Dorit. If they were so concerned about the dog and this wasn't just about making your friends look bad, they could have said, "No, go get the dog and bring it back to Vanderpump Dogs." Or, "We're going to go do a home check at this new woman's house." They didn't do any of this. That's why I think it's not about the dog, it's about making your friends look bad.

The bulk of the feud has been hashing out this version of events versus Lisa's denials, but it doesn't seem like the public (or the other Housewives) are siding with LVP this time around.