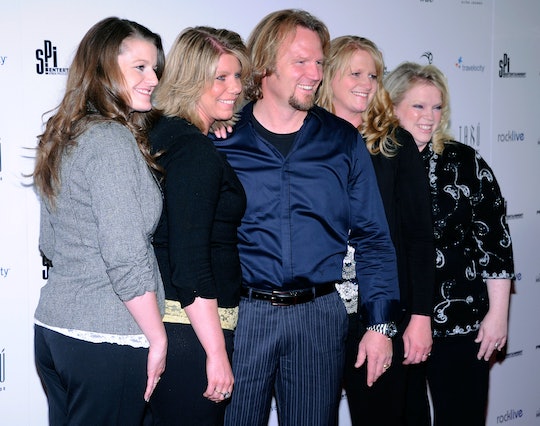 'Sister Wives' Twitter Is Extremely Confused About The Move To Flagstaff

After leaving Las Vegas last summer, the Brown family settled into rental houses in their new hometown of Flagstaff, Arizona. Season 13 tackled the fraught relocation but Sister Wives Twitter has questions about the move. Along with general trepidation about leaving Las Vegas for Flagstaff in the first place, Kody's wives make it pretty clear that they enjoy the dynamic of each having their own homes. In Las Vegas, Meri, Janelle, Christine, and Robyn each had their own house at the end of a cul-de-sac. It was a fairly ideal setup, since the family was in very close proximity, but each mom had her own space.

Kody, meanwhile had dreams of moving the entire family into one big happy megahouse. In August, it was reported by the Associated Press that the family had purchased four lots totaling nearly 15 acres of land for $820,000 a few miles outside of downtown Flagstaff. It wasn't clear at the time whether the family was planning to build one home or several, and now, the show is revealing why. There was clearly some disagreement between Kody and his wives over what should be done with the land. Adding fuel to the proverbial fire is the fact that Robyn and her college-aged son David seem poised to have much more space in the new digs than Kody's other wives and kids.

Lots of Sister Wives fans on Twitter are also wondering about the financial side of things. Many are questioning what the resale value of a massive polygamist family compound could possibly be? How much demand for it would there be in the market? And why are the Browns making one big house their permanent cohabitation plan when several of their 18 kids have already left the nest and only more will leave? What will happen once all the kids are gone? Will Kody and his four wives be empty nesters together in their enormous family compound?

Obviously, there are tons of questionable aspects of this living arrangement, which is why fans were so outraged when Kody started planning the single family home in secret, despite his wives' explicit (and reasonably thought out) wishes to the contrary.

In a clip from the show, Kody can be seen digging his heels in during a confessional interview, saying it's his job to get his family on board:

Obviously, this statement struck Twitter as a little tyrannical, especially for a family that prides itself on being the representation of a functional, modern polygamist family. They may have pulled off the move, but the dust is far from settled.