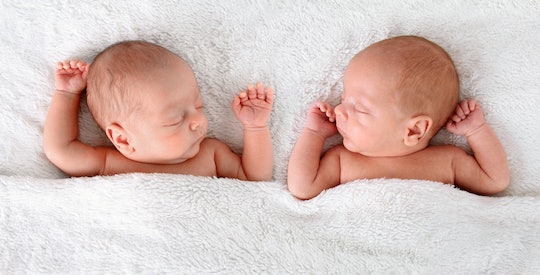 As a mom of twins myself, I can definitely confirm that finding out you're pregnant with more than one baby can be a big shock. But what isn't always obvious is that twin pregnancies can also be very risky, particularly depending on what "type" of twins you have. When British mom Vicky Plowright learned that she was carrying monochorionic/monoamniotic twins — babies that share the same placenta and amniotic sac — she also unfortunately learned that they'd only have about a 50-percent chance of survival. But it turns out that the twins may have survived in the womb because they hugged each other, and honestly, it's pretty miraculous.

According to The Independent, a sonographer discovered Plowright's "mo/mo" twins during her 10-week scan, after it appeared that her babies were positioned unusually close together. While most twins in the womb are considered dichorionic/diamniotic — each with their own placenta and their own sac, or basically two babies completely separate from one another — Plowright's twins were determined to be together in one sac, meaning they had a very high risk of umbilical cord entanglement. A tangled cord would mean one or both babies could be cut off from receiving life-sustaining nourishment, and the twins both ran the risk of being accidentally strangled by the umbilical cords as well. Unsurprisingly, Plowright told The Independent that she was devastated upon hearing the news.

Learning that your babies only have about a 50-percent shot at making it to viability isn't likely to inspire a ton of optimism in most expecting parents, and it's the kind of heartbreaking news nobody ever hopes to hear. But two weeks after the worrisome discovery, Plowright and her partner, Chris Cremer, learned something else as well — and it was pretty incredible.

Plowright explained that, during her 12-week scan, it turned out that the twins had somehow ended up "cuddling each other and holding hands," which, while totally adorable, also happened to have the effect of helping them stay completely still. This arrangement actually helped reduce the risk that they could become entangled in their umbilical cords, increasing their odds of survival. And although one of the cords did at one point begin wrapping around one of the babies, it actually ended up encouraging the twins to stay huddled in close to one another, reducing the risk of a fatal knot forming in the cord itself.

In December 2015, Plowright gave birth to the twins at 32 weeks gestation, and though they spent five weeks in the NICU, the relieved mom said her boys are doing well and are now "the best of friends." And, in fact, as beautiful as Plowright's story is, it's not actually the first time that a set of mo/mo twins may have made it through thanks to some special sibling snuggling in utero.

When Ohio mom Sarah Thistlethwaite gave birth to her mo/mo twin girls by C-section in 2014, she had already spent 57 days on bedrest in an attempt to make it as close as possible to her due date despite being so high-risk. Similar to Plowright, Thistlethwaite was able to get to 33 weeks gestation before doctors determined that she should deliver, according to People, and in a truly amazing moment just after the girls were delivered, the two girls were actually still holding each other's hand as the OB held them up for mom to see.

Thistlethwaite told People that her now-2-year-old girls are "definitely really close," and are "like two peas in a pod." But there's no question that they overcame incredible odds to get to where they are today. According to the Children's Hospital of Wisconsin, mo/mo twins are at an increased risk for a number of complications during pregnancy in addition to cord entanglement. Mo/mo twins can develop twin-to-twin-transfusion syndrome (TTTS) a potentially-fatal complication where the babies receive an unequal share of the blood supply from the placenta. They can also have issues with amniotic fluid levels, can develop at different rates due to intrauterine growth restriction (IUGR), and are at a higher risk of birth defects.

Mo/mo twins also run the risk of being born extremely pre-term, which comes with it's own set of risks and complications; prematurity can lead to hearing or vision issues, and increases the risk of cerebral palsy or developmental disorders. And though medical advances have had a huge impact on increasing survival rates in early premature babies, the Children's Hospital of Wisconsin notes that "babies born between 24 and 32 weeks still have a high risk of death or severe handicaps if they survive."

In other words, it's a huge deal that both Plowright and Thistlethwaite's babies are doing so well. But the fact that they may be alive and thriving specifically because they happened to cuddle up to each other? Well there really isn't anything more awe-inspiring than that.